by Elijah Gaddis, 2013
University of North Carolina at Chapel Hill 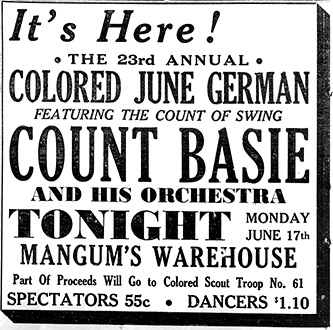 The June German once occupied a prominent place in the cultural life of eastern North Carolina. These yearly dances began in the late nineteenth century as a yearly diversion for the wealthy elites in the then-booming tobacco town of Rocky Mount. The tradition eventually crossed over into the African American community where the Germans were catapulted to even greater heights, becoming a nationally and internationally renowned stage for some of the most famous big bands in the country.

The origins go back to 1880 when the Carolina Cotillion Club of Rocky Mount held a dance in one of the downtown tobacco warehouses. It was originally conceived as a celebration of the tobacco crop that sustained the town and was held right before the autumn harvest. Not long after it started the event was moved to June where it quickly became the highlight of eastern North Carolina's social calendar. By the 1930s, the Rocky Mount June German was notable enough to get national attention, with write-ups in Life, The Saturday Evening Post, Parade, and the New York Times.

The event itself changed little from its early days. At its core, it was an all-night dance that took place in one of the many large tobacco warehouses in downtown Rocky Mount, “transformed for the night... into a sufficiently satisfactory Southern version of wonderland” (Daniel, Saturday Evening Post). Thousands of invited guests, first from all across North Carolina and eventually from throughout the east coast, descended on the town to dance the night away to the strains of some of the most popular bands of the day. But there were also intermission parties, brief soirées held in the middle of the event where the dancers decamped to nearby houses to fortify themselves with alcohol or other refreshments…and thousands of spectators. The cavernous warehouses were decorated with all manner of streamers and tinsel and ringed on either side by bleachers for the 5,000 or so people willing to pay just to observe the festivities.

By 1941, according to the Saturday Evening Post “almost as many people come for the party as the normal white population of the town.” The number of invitees and onlookers changed each year, as did the elaborate dance figures and themes. In 1940, the German was kicked off by a woman stepping out from “a stageset of an antebellum mansion in a Scarlett O’Hara dress.”( Daniels) Other years began with a choreographed march or ring display. The one constant was the peculiar name, unchanged from the very first years. A 1937 profile in Life attributes the label to a series of “huge festivals held at watering places in Germany during the 19th century.” While other sources on the name are not quite as definitive, virtually all suggest another origin. A “german” is an elaborate cotillion figure, one for which dances from New York to Chapel Hill were named in in post-Civil War America. Whatever it was named for, by the early 20th century the June German signified the height of elite white society in eastern North Carolina. It continued unabated past the middle of the century, with newspaper stories marking the 75th anniversary German in 1955.

The persistence of the dance for more than 75 years is remarkable in its own right. But the June German has had even greater longevity and importance because it was embraced by the African American community in the area. Starting in 1917, African Americans in Rocky Mount held their own June German on the Monday night following the white-sponsored event on Friday. Jonathan Daniels described the event briefly in his profile for the Post. Rife with stereotypes, his description relayed mentions of ”the colored June German” that took place in the same warehouse as “hotter and thicker and with more hotfoot.” His account is one of the few national ones to even mention the African American June German, an event that grew to be even larger than its namesake. 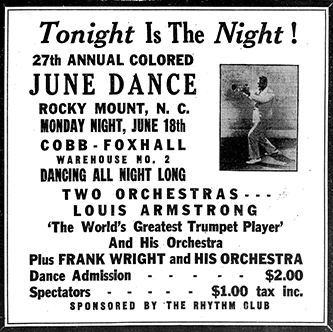 By the late 1930s, twenty years after their inception, the African American June German was large enough to attract national attention of its own. This coverage came almost exclusively from African American newspapers. In 1939 the Atlanta Daily World dubbed it “one of the largest Negro dances in the South.” A later commentary on the selection of Buddy Johnson to lead the dance was even more telling about the status the June German had achieved. The Baltimore Afro-American remarked that Johnson’s selection made him the “No. 1 name band leader of 1949, for the assignment goes each year to the band that is considered the greatest dance attraction.” Because the German was such a prominent event, Rocky Mount was able to attract the very best national touring bands. Besides Buddy Johnson, Rocky Mount’s African American June German played host to Roy Eldridge, Count Basie, and Louis Armstrong, among many others. At the peak of its draw, in 1949, the African American June German with Count Basie as the main attraction drew 24,278 dancers and spectators. The crowd from across the state was almost as large as the entire population of the town itself.

At the beginning, the African American June German was probably not much more than an attempt by the community to replicate for themselves some of the fun had by those with more money, power, and leisure time. But the African American dance developed its own traditions and moved away from the influence of the affluent white community. A 1940 article in the Baltimore Afro American explained the history of the event. It explained that “twenty-three years ago, under the auspices of the Elks, Fletcher West staged the first sepia June German.” After the Elks ceased planning the event a musician and promoter named “Frank Lewis, allegedly backed by white capital, promoted the affair.” Finally, in 1940 “the colored citizens began plans to wrest it from white control. Beginning this year, the Rhythm Club sponsored the dance.” Wresting the dance from white control was no small feat. And forging their own traditions, things like “the largest jitterbug contest ever staged in this section,” (Atlanta Daily World 1939) undoubtedly instilled pride in a community living under the laws of Jim Crow North Carolina. That the African American June German happened on a Monday night, when its attendees would have to go to work just hours after its completion, is a testament both to their work that helped the town run and to a need for diversion and community.

There is one final side note to the story of the June Germans in eastern North Carolina. While the original and the largest June Germans were held in Rocky Mount, other African American communities in neighboring counties had their own germans each year. While little is known about them, with scarce media coverage and participants’ memories fading, they are perhaps the best and most enduring legacy of a tradition that many North Carolinians made their own.

“Dance Till Dawn”, Arts and Culture, Our State. https://www.ourstate.com/june-german/.

My father, Albert McKenzie, would attend June German every year. He would always buy a new suit, hat, shoes and would be looking soooooooo good. He went every year, but he never took my mother. One year, he was asleep in his back seat and a man got in the car and drove off with him in it. Luckily, for some reason, I don't know the full story, the police stopped the car. This probably saved my dad't life. We never heard the full story, just that this man had stolen his car and got stopped by the police and the police saw him in the back seat sleep. My dad was not a drinker, but he must have had something to keep him from awakening until the police stopped the car.
I always wanted to know what they did at the June German.

I remember my Dad getting

I remember my Dad getting dressed
& going 2 Rocky Mount from Wilson NC. 2 the African American June
German. My mom never went. He
would come home the next day. Guess
he had a great time never said.

I would be interested in knowing if there are persons out there who attended the White or the Black June German in Rocky Mount. I am trying to gather information about the dance and the festivities around the dance, in homes or at the nearby hotel.

I am trying to locate an

I am trying to locate an article from the Evening Telegram in which the minister of First Methodist Church criticizes the June German as nothing less than an evening of drunken debauchery. I originally found the article in the Rocky Mount Library. If anyone can help me with this, it will be greatly appreciated.

I have located the news

I have located the news article that contained excerpts of Reverend H. M. North's sermon lambasting the June German from the pulpit of First Methodist Church on June 24, 1923. He singled out "the sponsors, its' guests, its' local supporters and even those who sanctioned the event with silence". Reverend North condemned not just the June German, but what he termed "modern dance" in general. He concluded by saying:"I appeal to church members of the city to uphold the highest standards". I attended two June German dances in the 1940's and 50 so I know that the "modern dances" that he is referring to were mostly ballroom and jitterbug. Well, we may have done "The Dip" which was pretty harmless as well!

Thank you so much for contributing your comment with additional information. We value your input.

my father Erby A. Johnston,

my father Erby A. Johnston, from Raleigh always attended while a student at Washington & Lee college class of 1932. He wanted to see my brother and I also be a part of the festival dance. he told us my interesting and fond memories of the dance. Are there any publications on the dance. Thanks for sharing the articles.

There is going to be a June

There is going to be a June German this year in December in Rocky Mount. Contact the Rocky Mount OIC for more information.

My mother attended this event

My mother attended this event .

Mr. Gattis' well researched article appears to be the basis for a "June German" article in June's Our State magazine by Jimmy Tomlin. Unfortunately, Mr. Tomlin does not credit Mr. Gattis' article at all. http://www.ourstate.com/june-german/