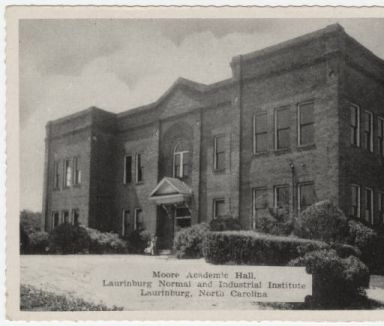 The Laurinburg Normal and Industrial Institute was established in 1904 by Emanuel Montee McDuffie and his wife, Tiny, educators who had traveled from Alabama in response to a request by the African American citizens of Scotland County to build a school in their community. Initially, the school had only one teacher, seven students, and assets of 15 cents. By 1915 Laurinburg Institute was providing valuable leadership and opportunity for blacks throughout Scotland County and beyond. Although a private institution, the school cooperated with state and county educational agents in establishing curriculum and standards. Academics were divided into primary, intermediate, and high school departments.

Ever mindful of the need to develop the economic independence of its students, the school also offered courses in housekeeping, dressmaking, laundering, wheelwrighting, blacksmithing, and printing. In this regard, the school embraced the philosophy and political position of black educator and leader Booker T. Washington. His belief in the "green ballot"-learning skills and trades that would provide blacks with economic self-sufficiency-was sometimes sharply criticized by other black leaders, but the policy helped pave the way for community acceptance of and support for the institute. In 1909 Washington visited Laurinburg as a guest of the McDuffies, and his public speeches there were well attended by the community's citizens, both black and white.

By 1932 Laurinburg Institute had been transformed from a single building to a thriving school complex. On former swampland stood 14 buildings that, together with the school's livestock, were estimated to represent up to $250,000 in assets. Twenty-seven teachers instructed 684 enrolled students; graduates operated the Hallowell-Wellington Kindergarten for black children. In 1915 former students also organized the Colored Civic League, an organization that promoted temperance, thrift, and industry and worked to improve sanitary conditions in the community.

Laurinburg Institute influenced life in Scotland County in several other ways. The school published a newspaper and circulars for the black community, and citizens used its printing facilities to produce opera house tickets, bulletins, and announcements. Laurinburg Institute's orchestra also enjoyed considerable success, as its members spent many hours on the road fulfilling requests for performances and bringing needed income to the school. A spin-off band formed by members of the orchestra featured famous trumpeter Dizzy Gillespie for two years, during which time he reputedly developed his well-known "bebop" style. Charlie Scott, the first African American to play varsity basketball at the University of North Carolina at Chapel Hill, attended Laurinburg for one year. Laurinburg Institute in the early 2000s remained a thriving private high school and two-year college under the direction of Emanuel McDuffie's grandson, Frank H. "Bishop" McDuffie.