They call him "Big Norm" in Bertie County. His name is Norman Perry Sr., and he's 82 years old, tough as old leather, and passionate about big swamps, hot-nosed dogs and coon hunting. He has been a successful farmer and ran the cannery at the Perry-Wynn herring fishery for 50 years, but to this day there's nothing he'd rather do than chase raccoons in a swamp on a cold autumn night. He talked about his lifetime of coon hunting while we drove to his hunting camp in the swampy bottomlands by the Roanoke River. 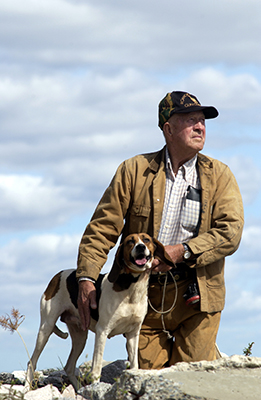 David Cecelski is a visiting professor at Duke University's Center for Documentary Studies.

Nathanson, Mel. "Norman Perry."  Photograph. 2001. To request permission for further use or to purchase a print, please contact the News & Observer.