I talked with Allan Troxler in the garden behind the Blevins House, a group residence in Durham for people with HIV/AIDS. A 51-year-old Greensboro native, Troxler started this bountiful garden eight years ago to provide produce and cut flowers for the residents and their caregivers. We walked down dense rows of sunflowers and okra, beneath 7-foot-high trellises of tomatoes and cucumber, alongside lush patches of watermelon and cantaloupe. Troxler has been a volunteer at Blevins House since it was founded 10 years ago by a group of his friends, organized as the AIDS Community Residence Association. Many of his closest friends have died during the AIDS epidemic, including his own long-time partner, Carl Wittman, in 1986. Like so many other Tar Heel volunteers and families, he has responded to the AIDS epidemic by quietly taking care of the small things that one person can do for another to make life more bearable, more decent. He nurses the ill, makes endearing keepsakes - and tends this garden.

He began by telling me the story of the person who inspired him to start the garden. 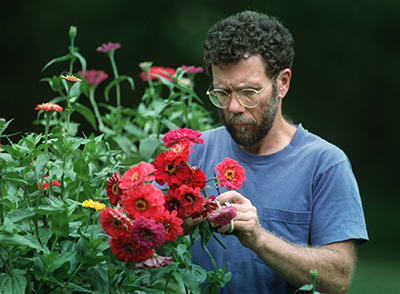 Seward, Chris. "Allan Troxler."  Photograph. 1998. To request permission for further use or to purchase a print, please contact the News & Observer.