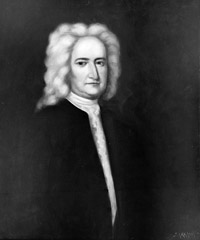 Philip Ludwell (ca. 1638-1723) was a career public servant who served both Virginia and Carolina. In Virginia, Ludwell was a secretary of state, commander of the militia, and a member of the House of Burgesses. In 1689 the Lords Proprietors commissioned Ludwell as chief executive “of that part of our Province of Carolina that lyes north and east of Cape feare.” Ludwell’s appointment marked the foundation of North Carolina as a colony with Albemarle being a part of the expanded colony. In time the proprietors chose Ludwell as the first governor of the Carolina province. Born in Bruton Parish, Somersetshire, England, Ludwell was the son of Thomas and Jane Cottington Ludwell. The young man immigrated to Virginia around 1660. He was married to the twice-widowed Lucy Higginson Burwell Bernard around 1667; they had two children, a daughter Jane and a son Philip. His first wife died in 1675. In October 1680 he married Lady Frances Culpeper Stephens Berkeley, the widow of Albemarle Governor Samuel Stephens and Virginia Governor William Berkeley.

In Virginia, Ludwell acquired several plantations and became active in politics. In 1675 he was a member of the Governor Berkeley’s council and he served briefly as secretary of state. During Bacon’s Rebellion of 1676, Ludwell supported Berkeley’s harsh response to Nathaniel Bacon and his followers. As a colonel, he led militia in capturing several of the rebellion’s leaders. Even after Berkeley’s recall to England and his subsequent death, Ludwell continued to support the measures that Berkeley took against Bacon and his followers. In 1689 Ludwell traveled to London as an agent for the House of Burgesses to present grievances to the royal government.

While he was in London, Ludwell met with the Lords Proprietors. On December 5, 1689, the proprietors commissioned Ludwell as governor of an expanded northern colony in the Carolina province. As governor, Ludwell was given the responsibility of bringing order to a region that had been inadequately led by Seth Sothel. He established his new government in North Carolina by May 1690. As chief executive, Ludwell maintained his residence in Virginia but traveled often to the colony. John Gibbs, who was serving as governor following Sothel’s departure, objected to Ludwell’s commission. Gibbs refused to concede power to Ludwell and challenged Ludwell’s authority. To settle the problem, Ludwell and Gibbs went to London to present their cases to the Lords Proprietors. The proprietors ruled in Ludwell’s favor upholding his appointment as governor.

In November 1691 the Lords Proprietors appointed Ludwell “Governor and Comander in Cheif [sic] of Carolina” with the authority “to apoint [sic] a Deputy Governor of North Carolina.” Thomas Jarvis was chosen as the deputy governor. With Jarvis in North Carolina, Ludwell concentrated on affairs in South Carolina. Yet, Ludwell acted in some capacity as chief executive of North Carolina beyond 1691. He most likely assumed North Carolina’s leadership while Thomas Jarvis was in poor health. During this second unofficial tenure, Ludwell helped to improve the problematic land policies. He sought to honor the validity of the Great Deed of Grant of 1668 that provided land on favorable terms as was given in Virginia. In time Ludwell returned to Virginia politics. Around 1700 he permanently retired to England and apparently died around 1723. Ludwell was buried in a family vault at Stratford-le-Bow Church in Middlesex, England.