Seth Sothel (d. ca.1694), known to history as among the most corrupt of chief executives, was commissioned by the Lord Proprietors in 1678 but did not serve. His tenure in office came four years later when those same men persuaded him to lead Albemarle in the aftermath of Culpeper’s Rebellion. They believed that Sothel had the ability to remedy the disorder, but he turned out to be a dreadful governor. In 1675 Sothel, “a person of considerable estate” in England, planned to acquire land in Carolina and establish a town, yet those plans never came to realization. Two years later Sothel purchased the earl of Clarendon’s proprietorship. 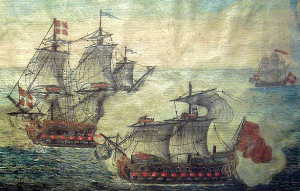 While Sothel was sailing for Albemarle in 1678, Algerian pirates captured his ship and took him to Algiers where they enslaved him. The English government offered two pirates in exchange for Sothel. However, the Algerians also demanded 6,000 pieces of eight. Two Englishmen living in Algiers provided the bond for the ransom, and Sothel was released returning to England in 1681. Sothel refused to pay the ransom and ended up in debtor’s prison. Upon release Sothel left for Albemarle.

By 1682 Sothel was in Albemarle. In his private life, Sothel was a large landowner married to the twice-widowed Anna Willix. They had no children and resided in a two room dwelling at a plantation at Salmon Creek (present-day Bertie County). On his plantation, Sothel established a trading post for conducting business with Indians. Sothel, an owner of Indian and black slaves, cultivated tobacco and raised cattle, sheep, and hogs.

As governor, he was accused of placing rebels on the council. The governor ignored the proprietors’s instructions to establish a court to try people involved in the “late disturbances.” Sothel also inappropriately used public money and protected pirates. The governor imprisoned George Durant, a prominent leader, for libelling his character and confiscated land belonging to Durant. Sothel illegally imprisoned two traders by claiming they were pirates. When one of the men died, Sothel refused to recognize the dead man’s will and seized his property. When Thomas Pollock, the executor of the estate, threatened to contact the proprietors about Sothel’s actions, the governor placed him in jail. Furthermore, Sothel accepted bribes, seized estates and slaves, and stole items.

Finally, the colonists had enough of Sothel’s escapades. In 1689 the colonists imprisoned the governor. The assembly tried Sothel and found him guilty of numerous charges. The assembly banished Sothel from Albemarle for one year and forbid him from holding public office. In December 1689, the proprietors, upon hearing of the charges, suspended Sothel’s governorship and commissioned Phillip Ludwell as governor.

In 1690 Sothel exercised his right as a proprietor to claim the southern colony’s governorship and once again commenced his dishonest ways. In 1691 the Lords Proprietors decided to rid themselves of Sothel by suspending the Fundamental Constitutions and Sothel’s governorship and commissioning Ludwell governor of the Carolina province. Ludwell arrived in Charles Town in 1692. At first, Sothel opposed the new governor, but he relinquished his power due to loss of supporters. Sothel left the southern colony and died around 1694. He was possibly buried at his Salmon Creek plantation.

"Ex Voto of a Naval Battle between a Turkish ship from Alger and a ship of the Order of Malta under Langon 1719."

I'm sorry to hear that. Reference Services at the Government & Heritage Library may be able to help you find the information you need. Their contact information is online at http://statelibrary.ncdcr.gov/contact.html

Or, if you click on the button to the right that says "Questions? Chat Now" you will be connected to a librarian to help you.