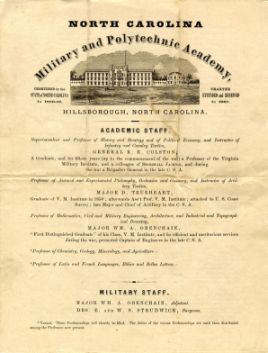 Academy building in town. Assisting Tew was W. D. Gaillard. Both entered the Confederate forces during the Civil War, and Tew was killed at Sharpsburg in 1862. Throughout the war the school was run by Maj. William H. Gordon and continued to supply officers and enlisted men to the forces.

In 1867 the legislature changed the school's name to the North Carolina Military and Polytechnic Academy and stipulated that eight students a year receive free tuition in return for two years' teaching in the state upon graduation. Apparently a failure, the school was discontinued in 1868.

The massive three-story, crenellated barracks that held 125 cadets, the uncompleted matching headquarters, and a half-dozen smaller structures were purchased by Paul C. Cameron in 1872, and in 1874 he persuaded the principals of the noted Horner and Graves School at Oxford to relocate to Hillsborough and occupy the buildings. The illness of one principal and death of the other within two years again left the buildings empty, and Cameron was unable to persuade another organization to take over the facility permanently. His heirs sold the 42 acres with the existing buildings to the Farmers' Alliance in 1895. In 1919 that organization sold the tract to a developer. The barracks and frame service buildings slowly decayed, or the bricks were appropriated for other construction. The headquarters building, a National Register structure, remains a private residence.

Gone but Not Forgotten, NC's Educational Past, UNC:http://www.lib.unc.edu/ncc/gbnf/MPI01-1.html

Abbreviated catalog giving academic courses, costs, staff, and information about the North Carolina Military and Polytechnic Academy, circa 1867. This item is from the last year the school was in operation. Image courtesy of UNC Libraries. Available from http://www.lib.unc.edu/ncc/gbnf/MPI01-1.html (accessed November 7, 2012).