The North Carolina Zoological Park, located in Asheboro, was the first American zoo originally designed to display its animals in situations as close to their natural habitats as possible. Zoos were not designed as such until relatively recently; instead, animals, alone or in limited numbers, were displayed as curiosities or as educational objects in what were called menageries. North Carolinians kept some native animals (deer, squirrels, or rabbits) as family pets; a large portrait of the children of John Hawks in New Bern included their pet deer. Occasionally, some shop owners-such as an early twentieth-century merchant in Hillsborough-kept a small monkey on a leash before their shop to attract customers. Public zoos did not become widely appreciated until the nineteenth century, the first notable one in the United States opening in 1894 in Philadelphia. 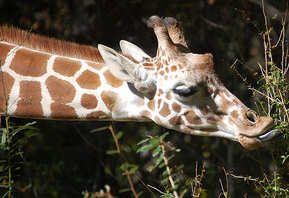 Beginning early in the twentieth century, a few animals such as an occasional buffalo, bear, monkey, tiger, lion, or even an elephant, perhaps aging and abandoned by a previous owner, could be found in municipal parks in Asheville, Charlotte, Greensboro, Raleigh, and elsewhere. A small privately maintained zoo in the town of Windsor had, in addition to animals, such exotic fowls as rhea, both blue and white peacocks, and Royal Palm turkeys.

A group of civic-minded North Carolinians in Raleigh in the late 1960s concluded that there ought to be a zoo in the state. There followed a campaign to convince the people of the state of a zoo's benefits for their own education and enjoyment as well as in saving many species of animals that were nearing extinction. The idea was convincing, and a North Carolina Zoological Society was formed; a site selection committee devoted two years to considering possible locations and ultimately accepted the gift of 1,371 acres from the society. Voters passed a $2 million bond referendum. The site was in Randolph County in the Uwharrie Mountain Range near the geographic center of the state, and Governor Robert W. Scott dedicated it in the spring of 1972. The Z. Smith Reynolds Foundation granted $1 million toward permanent construction, and the General Assembly appropriated $11.8 million for construction of the first geographic exhibition area, devoted to Africa.

The zoo opened in 1979 with a 3.5-acre Forest Edge Habitat for zebras, ostriches, and giraffes. It was soon enlarged, however, with new habitats for elephants, rhinoceros, lions, chimpanzees, and baboons. In 1982 a forest aviary became the zoo's first indoor exhibit. With the creation of North American habitats in 1993 and the opening of the Australian Walkabout in 2004, the North Carolina Zoo became even more positively identified as a natural habitat zoo. 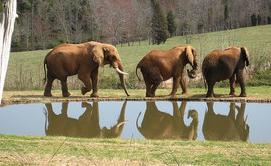 As the large area devoted to animals was developed, attention was also paid to plants. The North Carolina Zoological Park maintains both rare and ordinary plants common to the regions reproduced in the displays. Among the objectives of the state zoo are information, education, and enjoyment for visitors as well as the welfare and maintenance of the species. Facilities are available for study and research, and the zoo participates in the protection and restoration of threatened animals and plants.