Just south of the shores of Lake Mattamuskeet, North Carolina’s largest natural lake, stands the Octagon House. It was built in the Hyde County community of Lake Landing around 1857 by Dr. William T. Sparrow. Surrounded by broad, open farmland, it sits today much as it did those many years ago. The house is located at 30868 US 264 in Engelhard, North Carolina. The House, also known as the Inkwell or the Inkbottle House, was built using the octagonal mode of building made popular by Orson S. Fowler’s book, The Octagon House: A Home for All, first published in 1848. It is said that Sparrow built the eight-sided house after his conventional one was destroyed by a hurricane, believing that the unique form would give the home added protection from such storms that frequently assaulted the county. Sparrow was a medical doctor with a separate office on the grounds which has not survived. He also supplemented his income by farming the rich blacklands of the area along the Pamlico Sound which forms the southern border of the county.

Although the house has had a few modifications over the years, its original form and floor plan are intact. It is an eight-sided, two-story boardwall construction house with a central chimney that serves both levels (four rooms, each with a fireplace). It rests on brick piers, and the eight-sided pie shaped roof rises from all sides to the central chimney. Originally the roof was cypress hand rived shingles and later a wood shingled roof.

It has a front entrance on the northwest face of the house. The rear door is cut in the southwest face. Both doors have been reduced from their original double to single width. There are windows centered on both levels on the north, east, and south faces and above the front entrance. The surviving windows are six-over-six sash set in plain surrounds. Under the eaves a cornice featuring widely spaced sawn brackets, four to a side, accents a broad frieze decorated with shallow dentils, also widely spaced. Inside, there are two square-shaped main rooms on each floor, oriented back-to-back on a north-south axis around the central chimney. This leaves trapezoidal spaces on the east and west. These spaces have become an entrance, stair hall closets and smaller rooms.

The house passed from family to family and sat empty for many years. In 1976 local word got out that the house was to be demolished. A grassroots effort was immediately formed. In May of that year a group of twenty-two people met to determine if there were enough interest to save the house, if the building were sound enough to work with, and if they should attempt to purchase the property. With an affirmative vote on all counts, The Octagon House Restoration was formed. Officers were elected, bylaws were written, and the organization was incorporated in October 1976. The cause so galvanized the community that there were over 200 charter members. 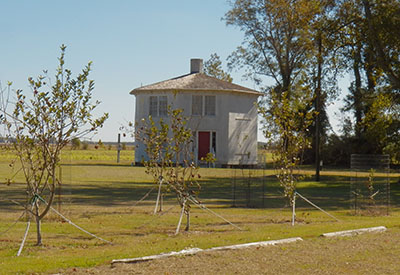 The group worked with the North Carolina State Historic Preservation Office to have the Octagon House listed in the National Register of Historic Places. This milestone was reached in 1978. A number of research studies were undertaken, including a study by the North Carolina Office of Research and History entitled "An Architectural Oddity Down East: or the Octagon House of Hyde County" (1979). Funding efforts got underway, and with the guidance of the Historic Preservation Office, a careful restoration was completed on both the exterior and interior of the house during the early 1980s.

In 2011, an orchard of eight Mattamuskeet Apple trees was planted on the grounds by local resident Walter Baum, who has also served as the Chairman of Octagon House Historic Restoration, Inc. Baum learned to graft trees using wood found on only a handful of 'Skeet apple trees that were in existence. He learned the craft from Creighton Lee Calhoun, a North Carolina native who has raised and preserved the heritage of heirloom apple varieties in the Piedmont area and is the author of Old Southern Apples. The legend of the 'Skeet apple has the first such apple appearing in the county in the gizzard of a wild goose. The variety was said to have become nearly extinct in the area until the orchard was planted. Another story tells that a George Williams who lived on nearby Lake Mattamuskeet during colonial times picked up the apples from a wrecked ship on the ocean beach and brought them to the county where he planted the seeds.

The Octagon House has undergone further preservation and restoration efforts, including a three-phase restoration and repair that began in 2016 when the wood shingled roof was replaced with a taper split Western red cedar shingle roof. Two additional phases will include upgrading the elevation of the house with new piers and foundation, followed by repair and restoration of the exterior sufaces, fireplaces and hearths, walls, window sills and the HVAC system.

Open Houses are held quarterly and are open to the public. The House contains many examples of daily life in the late 1800s and 1900s.