In 1965 Joshua L. Miner III, president of Outward Bound in the United States, came to North Carolina to encourage 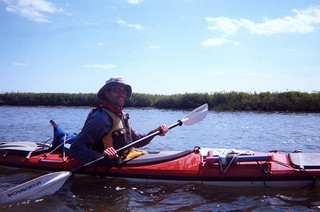 the founding of a new school based on his philosophy that young people needed authentic adventure and challenges in order to break out of the "cult of comfort and conformity" in which they were raised. In January 1966 a group of prominent citizens officially incorporated the North Carolina Outward Bound School and began the process of raising $300,000 to construct the necessary facilities. Early supporters included Governor Terry Sanford; Lieutenant Governor Robert Scott; Watts Hill Jr., chairman of the State Board of Higher Education; and Waldo Beach, head of the graduate school of religion at Duke University. L. Richardson Preyer, a former federal judge and candidate for governor in 1964, was elected chairman of the board. Preyer praised the Outward Bound idea-which has its roots in Great Britain in the 1940s-as an effort to "fulfill the need to preserve an undefeatable spirit and drive of youth by kindling the joy of exploration and adventure."

Marjorie Calloway and Jack Mansfield, director of special projects for the North Carolina Fund, selected the Linville Gorge area of the Pisgah National Forest as the site of the Outward Bound School. Designed by founder Kurt Hahn, the original plan called for a year-round school that would hire about 30 instructors and accommodate 1,000 students per year. The emphasis was on young people ages 16 to 23. The group would undergo a 26-day training program with a progressively more rigorous series of physical challenges. The training was based on the concept that "experience in encountering physical and intellectual danger leads to a self-comprehension that enables one to persevere when confronted with challenge." The climax to the training was a three-day "solo" experience in which the students were left to survive in the wilderness with minimum supplies and no outside assistance. The school drew students from all economic, social, and geographic backgrounds. Half were required to pay the full tuition of $350, and the rest attended on scholarships provided by various civic and business organizations.

By 1980 the Outward Bound School had expanded its curriculum and service components. The school emphasized environmental awareness from the beginning and began partnering with the U.S. Forest Service to collect litter (the "leave no trace" camping technique) and maintain the extensive trail system in Pisgah National Forest. Students and staff work at the Wildlife Care Center for injured animals and volunteer at the Signature Home in Morganton for developmentally disabled adults. Each course of instruction incorporates a day of service, and staff and students complete more than 4,300 days of service each year.

By the early 2000s the private, nonprofit, nonsectarian North Carolina Outward Bound School had adventure courses in western North Carolina, the North Carolina Outer Banks, the Florida Everglades, the Bahamas, Costa Rica, and northern Patagonia (Argentina). The school offers a variety of courses, from backpacking, rock climbing, and mountain biking to white-water canoeing. The emphasis remains on challenge and personal growth. Courses are geared toward youth ages 14 to 21, but there are courses for women only, educators, parents and teens, as well as an instructor training course and a Going Beyond course designed for adults age 50 and older. The school also offers professional development programs for businesses with an emphasis on leadership, team building, and communication as well as semester courses offered for college and high school credit. Outward Bound provides nearly $200,000 annually in scholarships.