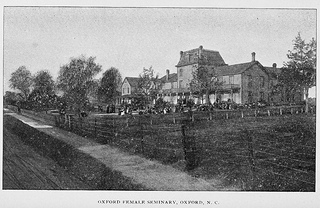 Oxford College (originally Oxford Female College) was a female academy established in Oxford, the Granville County seat, in 1850. The school's first president was Samuel Wait, a Baptist minister and educator. He served as president until 1857, when he was succeeded by John H. Mills. The school continued to operate during the Civil War, unlike many similar academies throughout the South. When Mills left in 1868, the school passed through a series of management changes until 1880, when F. P. Hobgood became president.

Hobgood had for the previous ten years operated the Raleigh Female Seminary, and soon Oxford College was transformed by his administrative skill and personal charisma. The school's course of study was divided into "preparatory" and "collegiate" departments; its curriculum included classes in English language, literature, mathematics, history, science, Latin, French, and German. Students were also required to engage in daily physical activities, many of which were based on "the Swedish system of physical culture" that promoted their "gracefulness of bearing and movement." All students wore the same uniform "for the sake of economy and appearance and to prevent rivalry." Students were also required to attend "chapel service every morning and [to take] part in suitable devotional exercises that consist of singing hymns, reading of Scripture in concert, and prayer." On Sundays, students could attend any church they desired.

The success and popularity of Oxford College during the Hobgood administration, as well as its importance to the region, was evidenced in January 1904 following a fire that destroyed the school's buildings. Without solicitation, a group of Oxford citizens established a corporation that succeeded in raising money to rebuild the college "on a larger and more enduring basis."

Tuition and board expenses for Oxford students early in the twentieth century were $142.50 per year. Additional courses of instruction, such as piano, typewriting, or stenography, required additional fees. Financial assistance was available, as was a discount to daughters of Baptist ministers. Oxford College was closed in 1925.