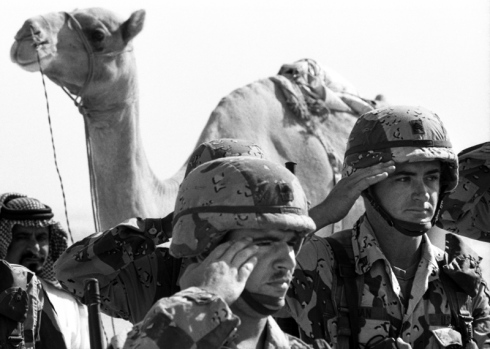 The immediate effect on North Carolina of Iraq's invasion of Kuwait in August 1990 was the deployment of the 82nd Airborne Division from Fort Bragg to Saudi Arabia. Although the army cloaked the movement in secrecy, the absence of thousands of men from Fort Bragg could not be hidden. Units from the 82nd had taken part in previous operations, but this time the entire division disappeared almost overnight.

Although the state had long taken pride in being the home of the 82nd, some negative aspects emerged within weeks of the deployment. The economy of Cumberland County slumped, and businesses dependent on military trade suffered; some failed and others came close to collapse. These problems were compounded by the mobilization of reserve and National Guard units, leaving hospitals, fire departments, and other public services shorthanded.

The possibility of a peaceful solution to the crisis disappeared by November, leading to demonstrations by both antiwar groups and those favoring Iraq's forced withdrawal from Kuwait. The prospect of war influenced the senatorial campaigns of Jesse Helms and Harvey Gantt: Republican incumbent Helms reminded voters that, earlier, Gantt had spoken in favor of a reduction in military expenditures, while Gantt insisted that he supported the troops in the field. For his part, Senator Terry Sanford announced that he favored letting the United Nations resolve the conflict through negotiation.

Nearly every week, additional reserve and National Guard units were called up. After processing at Fort Bragg, units were promptly sent to the Persian Gulf, where their accommodations were uncertain. The 139th Rear Area Operations Center camped in the sand, whereas the 382nd Public Affairs Detachment was housed in a hotel with chandeliers and waiters. In December 1990 a ceremonial sendoff was held at Camp Lejeune for the departure of 24,000 men for the Gulf. It was the marines' largest troop review in the twentieth century. The soldiers spent Christmas at sea.

In mid-January, believing that war was not inevitable, a group of "peace pilgrims" traveled from Raleigh to Baghdad in an ultimately futile attempt to confer with Iraqi dictator Saddam Hussein. That month, the state's U.S. representatives split 10 to 3 along party lines in favor of debate over the president's war powers, but all voted to give President George H. W. Bush the authority to wage war.

The war began on 17 Jan. 1991 as massive air strikes targeted Iraq. Many North Carolinians demonstrated their support for the troops and displayed the flag every day. High Point University canceled an appearance by antiwar activist Daniel Berrigan, and schools throughout the state adopted service personnel as pen pals.

Ground operations began on 24 February, with the 82nd Airborne Division first over the line. On 27 February President Bush declared Kuwait liberated. By 9 March some of the 82nd's troopers were back at Fort Bragg, and by the end of May most North Carolina reserve and National Guard units had returned home. A total of 25,000 North Carolina soldiers had participated in the Persian Gulf War. Among the war's 306 American casualties were 12 North Carolinians. A parade in Raleigh on 29 June 1991 officially commemorated the end of the war.

North Carolina lost 17 service personnel during the Persian Gulf War.  On January 13, 2016, North Carolina Governor Pat McCrory issued a Proclamation of the 25th Anniversary of the Persian Gulf War commemorating the service of these 17 individuals. A ceremony commemorating the anniversary was held on January 15, 2016 in which the governor also announced the distribution of a $100,000 fund to the North Carolina Museum of History for creation of a memorial. The $100,000 was a gift from the Kuwaiti Government as seed money for a memorial. The fund will be distributed from the North Carolina Department of Military and Veterans Affairs to the Museum of History on the 25th anniversary of the start of Operation Desert Storm on January 17, 2016.

My late husband had photos

My late husband had photos from his time in the Army. The first Gulf War, some from when he was stationed in Germany, Korea etc... I just wondered if there may be a place I could donate a lot of these photos? They really show life in the military. Thank you! He was based on Fort Bragg.

Thanks for visiting NCpedia. We are grateful for your husband's service in the Army. You can contact the Military Archivist at the State Archives of North Carolina to discuss donation options. His name is Matthew Peek, Military Archivist. You may contact him at 919-814-6854 or matthew.peek@ncdcr.gov. Please let us know if you have any other questions.