The Piedmont Urban Crescent is a semicircular band of cities and towns extending from Raleigh to Charlotte, including 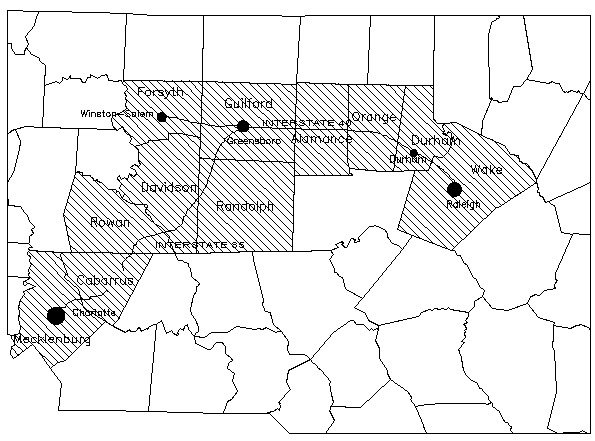 Durham, Burlington, Greensboro, Winston-Salem, High Point, Salisbury, and many smaller communities. It owes its origin in large part to the North Carolina Railroad (NCRR), which was built in the 1850s. Of the cities named, only Winston-Salem does not lie immediately on the line of the NCRR. Although the railroad was deliberately routed to join the existing towns of Raleigh, Hillsborough, Greensboro, Salisbury, and Charlotte, they were at the time little more than villages and were widely separated. Within a generation they grew in size as the new towns of Durham, Burlington, High Point, Thomasville, and others were called into existence by the railroad. The Urban Crescent was clearly apparent by 1910.

With advancing technology, the cities attracted newer forms of transportation, following essentially the same route and contributing further to urban growth. U.S. 70 follows the Urban Crescent from Raleigh to Salisbury, and Interstate 85 runs from Durham to Charlotte. The three airports at Raleigh/Durham, Greensboro/Winston-Salem/High Point, and Charlotte are by far the largest in the state.

Further, the state's most influential newspapers and television stations are located in the Urban Crescent, as are the leading institutions of higher education and the high technology industries that depend on them. The Research Triangle lies near its eastern end, between Raleigh, Durham, and Chapel Hill. The proportion of college graduates (and high school graduates) in the Urban Crescent far exceeds that in the state at large. The region has also enjoyed comparably greater economic growth and higher per capita incomes.

Population growth, in large part due to in-migrationthough recently out-migration has increased around the state-demonstrates a strong urban shift. In the early 2000s, nearly 83 percent of the state's net growth occurred in the larger urban areas, known as Metropolitan Statistical Areas (MSAs). The Raleigh-Cary MSA grew by 14.8 percent, the Wilmington MSA by 10.4 percent, and the Charlotte-Gastonia-Concord MSA by 11 percent between 2000 and 2004. By 2004 the so-called Combined Areas of Charlotte-Gastonia-Salisbury and Raleigh-Durham-Cary held almost 38 percent of the state's population, accounting for nearly 62 percent of North Carolina's net gain in this period.

As they grow larger, North Carolina's cities are also growing together. Raleigh, Durham, and Chapel Hill are coalescing around the Research Triangle; Greensboro and High Point now touch and are approaching closer to the expanding city limits of Burlington and Winston-Salem. Taken as a whole, the Piedmont Urban Crescent represents a miniature version of the megalopolis of the Northeast.

"The Interstate 85 and 40 Corridor through the Piedmont or the "Urban Piedmont Crescent."" Image courtesy of the NC State University- Extention Foresty- Natural Resources Inventory of North Carolina. Available from http://www.ces.ncsu.edu/nreos/ncnatres/ (accessed October 11, 2012).