Gladys Moore (later Pittman), originally from Pitt County, North Carolina, joined the U.S. Army’s Women’s Auxilliary Corps (WAAC) in 1943 and became a radio operations and Morse code instructor for Army pilots. WAAC was established by the U.S. Congress in 1942 as an auxilliary non-combatant service unit and then upgraded to active duty status as the Women’s Army Corps (WAC) in 1943. Apart from nurses who joined the Army Nurse Corps beginning in 1901, women had otherwise not served officially in the U.S. Army and when they did, they did so with separate basic training and living facilities. By the mid-1970s, the Army had consolidated basic training for men and women as a matter of policy and women had begun to be integrated into training units. The WAC was officially disestablished in 1978 by the U.S. Congress. Gladys Moore Pittman worked for the U.S. Army for a total of 12 years, with combined military and civilian service. 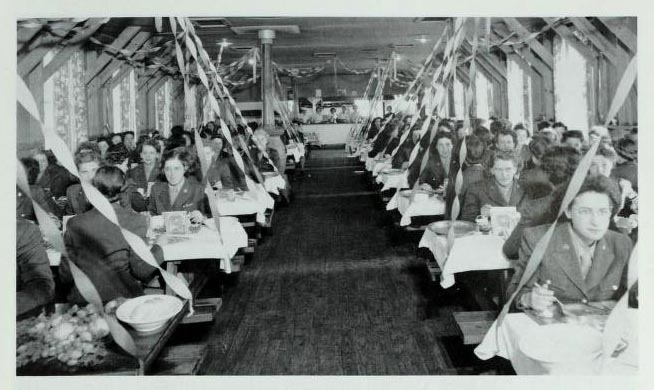 Gladys McLean Moore was born on July 23, 1920 in Pitt County, North Carolina to parents B. R. and Effie Hobgood Moore. She grew up on a farm in the county near Farmville and graduated from Walstonburg High School in nearby Greene County. After high school, she attended two years of college at Atlantic Christian College (now Barton College) in Wilson, North Carolina. She worked for a few years at a bank in Farmville before enlisting in the U.S. miliatary.

Gladys Moore decided to enlist in the Army’s Women’s Army Auxilliary Corps (WAAC) to escape the monotony of daily life in Farmville and out of curiosity for what life would be like in the Army. The nearest station for signing up was in Durham, North Carolina, and she traveled there in February 1943 to enlist. After her swearing in, she traveled to Fort Oglethorpe in Macon, George for boot camp.There were only women recruits there, although the training officers were men. After completing basic training and taking aptitude tests, she qualified for further training in radio operations and repair.

Following basic training was sent to Kansas City, Missouri to attend the Midland Radio and Television School in Kansas City to learn radio repair, operation procedures, and Morse code so that she could train pilots. The Midland school had been a civilian vocational school that the U.S. Army took it over during the war to train radio operators. Moore lived in a hotel with other Army trainees while she was in school there for three months. In an oral history interview, she recalled being in school all day and having meals at a restaurant that had been taken over by the Army.  She also recalled having compulsory study periods that lasted into the evening. Classes were held Monday through Friday, and on Saturdays students had to attend miliary drill training. In her free time on Sundays she would go to church and explore Kansas City. She and other trainees were also invited into civilian homes for meals.

Following her training, she was assigned to a an Army Air Corps base in Sioux Falls, South Dakota where she was stationed for about a year and a half. She recalled that there were approximately 200 women at the base. She was one of 25 or 30 women there who were there to train pilots. There was a lot of turnover of personnel, and every five or so weeks, she received a new group of pilots to train. By that point she had reached the rank of sergeant.

In her spare time, she would read, dance, go into town, and go on dates with pilots in Sioux Falls. She recalled frequently visiting the Corn Palace Festival in Mitchell, South Dakota where famous jazz musicians and their bands would play. She also recalled being invited into civilian homes and would often have Sunday dinner with families outside the base.

In March 1945 as the war was winding down, she was transferred to Hendricks Field in Florida to work at the movie theater on base since there was no longer a need to train pilots for radio operations. She ran the theater there while waiting for the war to end. After the war ended, she was discharged on November 19, 1945. After her discharge, she took a job at Fort Bragg processing military separation records for service personnel since clerical workers where in short supply.

Gladys Moore met her husband, James Hosten Pittman, while she was at Fort Bragg. He was a master sergeant in the U.S. Army and was originally from Oak Hill, West Virginia. They were married on June 12, 1949 in Pitt County. She later worked at Seymour Johnson Air Force Base, and with her combined military and civilian service, Gladys Pittman spent a total of 12 years working for the Air Force.

Listen to a recording of an oral history interview of Gladys M. Pittman, taken on July 16, 199. In the interview Pittman discusses her decision to join the military, basic training, her work as a radio operations instructor, and details about life in the military.