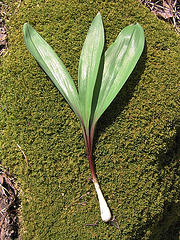 Ramps (Allium tricoccum) are wild leeks or onions found in eastern North America. They grow wild high in the Great Smoky Mountains. Related to the ramson, a kind of garlic with broad leaves, the ramp has an edible and strongly flavored root. Besides eating them, Native Americans, in particular the Cherokee, used wild ramps in treatments for coughs and colds and in a poultice applied to bee stings. They were also valuable to early settlers because they offered variation in a relatively limited diet and were even thought to cleanse the blood.

Some modern North Carolinians chop ramps up and add them to dishes such as scrambled eggs, while others prefer them raw. Mountain folk, nicknamed "ramp-eaters," have long enjoyed gathering ramps in springtime. During the early 1930s these gatherings evolved into the Haywood County Ramp Convention, a tradition that has become a present-day local festival. The convention, which also features picnicking, music, singing, and traditional Mountain activities, is possibly North Carolina's most odorous festival. The Rainbow and Ramps Festival in Cherokee is also held each March.