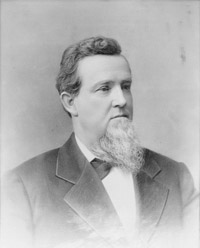 Alfred Moore Scales (1827-1892) served with distinction in the Confederate army, in the legislature, and in Congress before his election as governor in 1884.  The son of Robert and Jane Bethel Scales, he was born on November 26, 1827, at Ingleside, the family plantation east of Reidsville in Rockingham County.  He attended Caldwell Institute in Greensboro before entering the University of North Carolina in 1845.  Scales studied law at the university but never earned enough credits for graduation.  He left school, continued private study under Judge William H. Battle, and passed the bar exam in 1852.  He established his practice in Madison in western Rockingham County.  Scales married twice, but little is known about his first wife, Margaret Smith of Louisiana, because she refused to move to North Carolina.  The legislature finalized Scales’s request for divorce in 1858.  In 1862 he married Katherine Henderson, daughter of former state Supreme Court Chief Justice Leonard Henderson, who survived him.  They had no children but raised a niece, Kate Lewis Scales, as if she were their daughter.

The year 1852 proved to be memorable for Scales.  He also served as solicitor for the county and, with the Democratic Party's resurgence, won election to the state House.  Rockingham County sent him back to the house for the 1856-1857 session, and at the end of the term, he left for Washington as the Sixth District representative in Congress.  When the end of that session in 1859, Scales returned to his law practice in Madison but shortly thereafter became involved in the highly partisan presidential election of 1860.  As a southern Democrat he supported John C. Breckinridge and served as a presidential elector on his behalf.

Alfred M. Scales volunteered for Confederate service a month before North Carolina seceded from the Union.  He joined the “Rockingham Guards” and, when that unit became Company H of the Thirteenth Regiment, Scales was elected captain.  Through promotion and appointment he rose to the rank of brigadier general, seeing action in some of the war’s principal encounters.  He received serious wounds at Chancellorsville and Gettysburg (there seeing action in all three days of the battle) but completed his service with high honors.  After the war Scales moved to Greensboro to continue his law practice.  Politics called again in 1875 when he was elected to the Forty-fourth Congress.  Re-elected four times, he served through December 1884.  One of his particular concerns was the negative treatment afforded the Indian nations, which offended his personal motto of “duty and honor go hand in hand.”

Democrats nominated Scales for governor in 1884.  His Republican opponent, Tyre York of Wilkes County, hoped to use the still heated prohibition issue against his opponent, but Scales steered clear of the controversy and appealed to the need for party unity.  Scales defeated York by 20,000 votes, indicating that the people wanted to bury bitterness and enter a period of peace and quiet.  Scales’s administration followed that pattern.  No major legislation came forth, but neither did major confrontation.  For the most part, the governor recommended improvements to already functioning facilities, such as repairs to railroads and highways, a greater quantity and quality of schools with a longer school year, and new directions for the Department of Agriculture to assist farmers.  Scales persuaded the United States Coast and Geodetic Survey to study the North Carolina oyster beds with a view to improving that industry in the state.  Scales returned to Greensboro in 1889 to serve as president of the Piedmont Bank.  He died on February 9, 1892, and was buried in Green Hill Cemetery in Greensboro.