by the Government & Heritage Library, State Library of North Carolina, 2012-2019

The State Library has always been central to the workings of the state.  Within a generation of the seat of government moving to Raleigh, state officials had recognized the need for a centralized and properly administered collection of legal texts, state publications, and Congressional documents, and appointed the Secretary of State as the guardian of these records.  When the original Capitol, which included a library of nearly 1000 volumes, burned in 1831, plans for the new building included space for a re-constituted State Library.  A full time librarian was appointed soon after the new Capitol opened, thus cementing the Library’s status as a vital part of state government.

In the 19th century, at a time when access to learning was a luxury that few could afford, and libraries were rare and mostly private, the State Library acted as a library for the public.  For many years, books from the collection circulated freely to members of the community, though the primary focus of the Library remained on serving the needs of state officials.

By the early 1900’s, the State Library had expanded to more than 40,000 volumes, benefiting from both a vigorous exchange campaign with other states, and a concerted effort on the part of the Library trustees to increase the range and quality of the collection on behalf of the public. The beginning of the 20th century saw other developments that affected the Library as well–the collection was cataloged in Dewey Decimal order at the turn of the century, an Assistant Librarian (Carrie Broughton) was appointed in 1902, the NC Library Association was formed in 1904, and the State Library Commission was established in 1909. 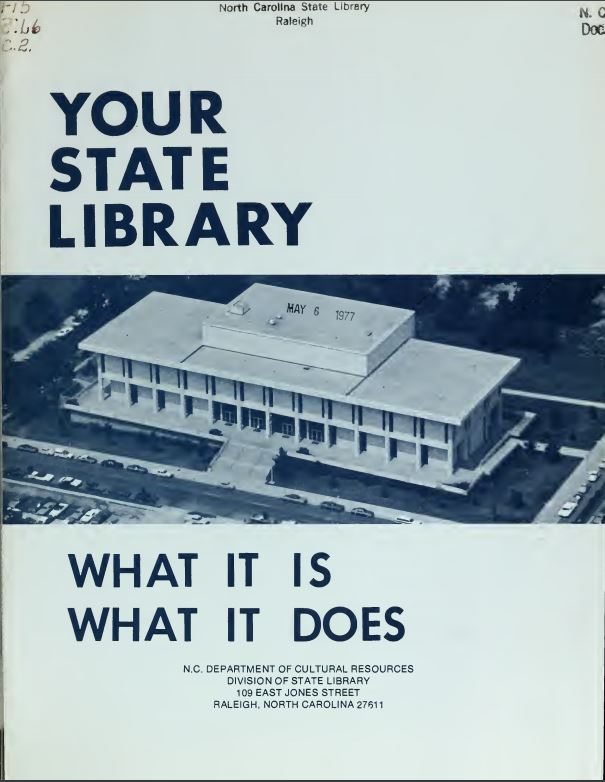 As the century progressed, the State Library grew and evolved, as new needs were recognized  and new technologies became available.  Already richly eclectic in scope, the collection was further expanded by an increased concentration on genealogical material, as library staff noted an escalating demand for assistance with family history.  The staff, small though it remained until mid-century, continued to innovate and provide extra services, such as indexing the News & Observer and abstracting and publishing 19th century marriage and death notices.  With the merger in 1956 of the State Library and the Library Commission, both staffing and programming expanded dramatically.  Multiple initiatives and services–administration of state aid for libraries, library advocacy and delivery for the blind, IN-WATS reference service, the Library Processing Center, strengthened interlibrary lending and consortial agreements–were implemented in rapid succession in the next 2 decades.

As the Library approached the end of the millennium and the  beginning of its third century, new media and forms of information sharing were being created at an accelerating rate. The Audiovisual department transitioned from 16 millimeter films to videotapes to DVDs. Books for the blind, originally limited to Braille and large print items, were gradually augmented by books on phonograph records, books on tape and then digital recordings.  Hardcopy government publications gave way to born digital documents, podcasts, websites, and a variety of social media formats. The State Library has adapted to these changes, providing expertise on policy, infrastructure, metadata and cataloging, and technology, with such statewide initiatives as NC ECHO, the Access to State Government Information Initiative, the Ensuring Democracy Through Digital Access project, NOBLE, and NC CARDinal.

Until the beginning of the 20th century, the State Library was, essentially, a one man operation, though the Librarian was assisted during the mid and late 1800s by the Library Trustees, as well as by agents who were contracted to help assess the collection and acquire new materials. In 1902, an Assistant Librarian was officially appointed, but staffing remained largely static, so that even by mid century there were only 5 permanent employees. In 1956, the Library’s structure was dramatically altered when the Library Commission and the State Library were merged, so that by the end of the first biennium (1958), there were 36 Library Governors and staff.

Program changes and additions, such as IN-WATS, the audiovisual department, and the Library Processing Center, continued to add staff to the Library throughout the decades, so that, by 1990, there were more than 100 people in the various divisions.  As the audience for library services has changed and Library itself has re-focused on core missions, the staffing levels have changed, so that now, in 2012, the Library boasts a staff of more than 70, dedicated to providing services to the state through consultation, certification, research assistance, literacy promotion, and services for the blind. 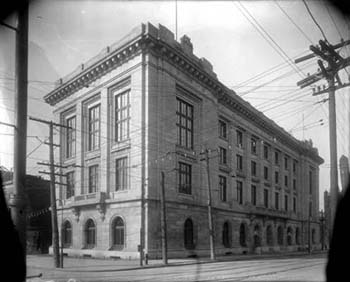 The State Library has always had a home in state government, but never a building of its own. Starting off as a single bookcase in the Secretary of State’s office in the Capitol building, it was reconstituted and given quarters in the re-built Capitol, which it occupied until 1888.  At that time the Library moved to a new Supreme Court and Library Building, where it stayed for just over a quarter of a century, before moving again to the new Administration Building (now the Court of Appeals Building) in 1914.

The Library outgrew this new space as well, and, after a temporary move to a commercial building, it moved one last time in 1969 to the Archives and History/State Library Building at 109 East Jones Street in Raleigh, where it currently shares space and works closely with other divisions within the North Carolina Department of Natural Cultural Resources.

The milestones for the State Library have, for the most part, been quiet and internal, of significance–at least at first sight–only to the people most closely involved with them.  But those quiet milestones have ripple effects that are, in many cases, still felt today throughout the state.

Many local libraries owe their original existence to the State Library’s careful stewardship of federal and private funds, such as money allocated by the Institute of Museum and Library Services, and–early in the 20th century–the Carnegie fund. The appointment of Carrie Broughton, first as Assistant Librarian (1902), and then as State Librarian (1919), was not only a profound social shift, since she was the first female head of a state government department in NC, but also a hugely significant development for thousands of individual users of the Library, since it was she who both systematized the library collection, and also initiated what has become one of the strongest genealogy libraries in the South.  Even time-limited projects such as the Library Processing Center and the IN-WATS phone reference service (both of which were initiated in the 1950s and 60s, and phased out by the 1990s), provided innovative and much needed support for county and city libraries–and their patrons–by centralizing critical tasks such as cataloging and in depth reference service, thus allowing individual institutions to focus on local service.

Images and government publications from the North Carolina Digital Collections