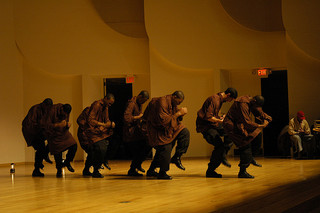 Step dancing, or "soulstepping," is a form of competitive dance exhibition developed by African American fraternities and sororities in North Carolina and other southern states. The dances feature synchronized movements and percussive beats. Step dancing is a showcase for exhibiting a team's individual style and showing its unity. Its origins can be found in the traditions of competitive drill teams and marching bands and take their movement patterns from African and slave dances such as patting juba and ring shouts.

Elements of step dancing come from many sources. The use of hands and feet to create percussion was a major element of black folk dances since the 19th century, as it was illegal for enslaved people to own drums. This evolved after World War II ended, as many men entered into universities and with the help of the G.I. Bill. There, stepping grew in black fraternities alongside a cappella (without accompaniment) musical performing arts. Through the 1960s, step dancing increased in popularity, and grew to include elements of African ritual dance with its preexisting elements of military training, like marching, drills, and call-and-response vocalization.

The term "stepping" became popular in the 1980s. Popularized on the campuses of historically black colleges and universities, the informal shows evolved to public exhibitions, often used as fund-raisers for charitable causes. One of the most popular step shows, the East Coast Step Show, originated on the campus of North Carolina's Fayetteville State University in 1998. College step teams come from throughout the East and South to compete, with the prize money designated for the winning team's community projects.

In recent years, step dancing organizations in the United States have established cultural ties to the Gumboot dancers of South Africa through Step Afrika!, an organization that hosts an international festival each year in Soweto, South Africa.

Susan Eike Spalding and Jane Harris Woodside, eds., Communities in Motion: Dance, Community and Tradition in America's Southeast and Beyond (1995).