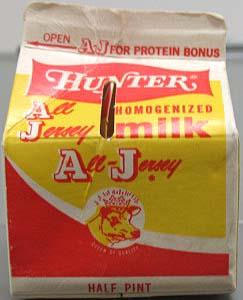 The designation was requested by the state Milk Commission (established in 1947), and introduced by Senator Aaron W. Plyler, a Democrat from Union County. According to Representative Charles Beall, the bill had the support of the North Carolina farmers and most of the cows. The bill passed in the Senate with a vote of 39 to 3. In the House, it received 93 votes yes, 3 votes no, and several humorous votes “moo.” Opposition to the bill cited the desire to keep from cluttering the state statues. One representative voted no due to a desire for a state beverage with special ties to North Carolina, such as Pepsi-Cola, founded in New Bern.

In making milk the official state beverage, North Carolina followed 17 other states, including both South Carolina and Virginia.

Milk is a mixture of fat and protein in water, with dissolved sugar, minerals, and vitamins. It is high in nutritional value and contains all essential amino acids. Most notably, milk is high in calcium and phosphorus which helps with bone development.

Milk sours because of the microorganisms within it living and developing. Cooling the milk reduces the spread of the spoilage bacteria, making the milk last longer.

North Carolina bans the sale of raw milk for human consumption. Milk must go through a pasteurization process, sterilizing the milk by raising it to a high temperature to destroy harmful bacteria. Much of milk that is sold has also been homogenized, or forced under high pressure through small holes to evenly distribute the fat.