In 1862, President Lincoln's Emancipation Proclamation opened the door for African Americans to enlist in the Union Army. Although many had wanted to join the war effort earlier, they were prohibited from enlisting by a federal law dating back to 1792. President Lincoln had also feared that if he authorized their recruitment, border states would secede from the Union. By the end of the war, approximately 180,000 African-American soldiers had joined the fight.

In spite of their many hardships, African-American soldiers served the Union Army well and distinguished themselves in many battles. Of their service to the nation Frederick Douglass said, "Once let the black man get upon his person the brass letters U.S., let him get an eagle on his button, and a musket on his shoulder and bullets in his pockets, and there is no power on earth which can deny that he has earned the right of citizenship in the United States." African-American soldiers comprised about 10 percent of the Union Army. It is estimated that one-third of all African Americans who enlisted lost their lives.

From African American Soldiers During the Civil War

Broadside encouraging men of color to join the Union Army in 1863. Includes excerpts of relevant legislation and quotations from officials. Courtesy of the National Archives. 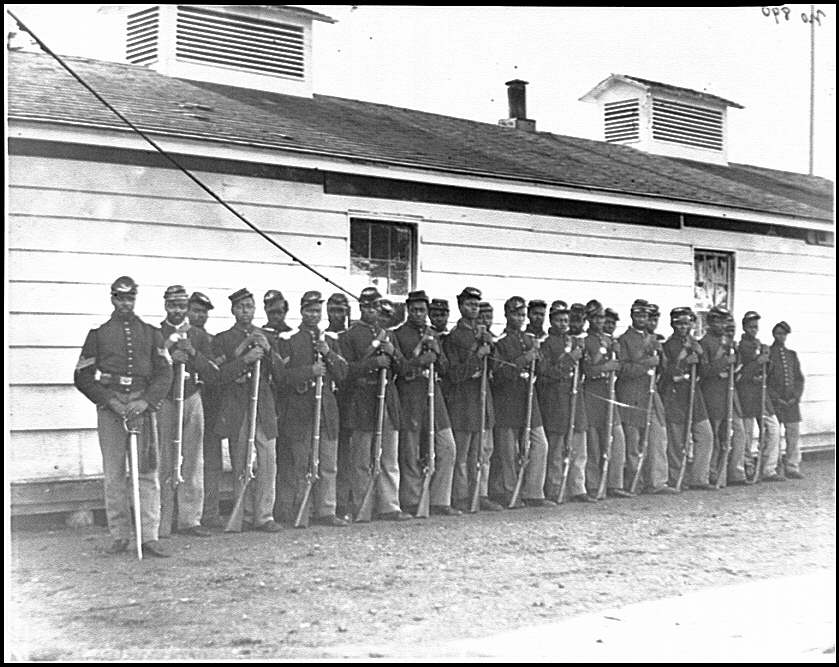 The soldiers of Company E, 4th U.S. Colored Infantry. After the Emancipation Proclamation freed slaves in Union-occupied territory, African Americans in both North and South joined the Union army. Image courtesy of Library of Congress.

Black Soldiers in the U.S. Military During the Civil War at the National Archives