Below is an excerpt written by Marvin Kranz's, former Historical Specialist of the Library of Congress' Manuscript Collection, for Words and Deeds in American History. He detailed the Wright brothers' flight and its challenges.

Before crashing and damaging their flying machine, Orville Wright (1871-1948) and his brother Wilbur Wright (1867-1912) achieved partial aviation success on 14 December 1903 with a flight of 112 feet. The brothers did not consider this achievement a true flight, however, and they repaired the damage and awaited favorable flying weather. Three days later, they successfully launched their plane several times, and on the fourth flight achieved a distance of 852 feet, with Wilbur Wright staying airborne for fifty-nine seconds. After the plane was brought back to camp, it was caught by a powerful wind gust, which forcefully slammed it into the ground. The resulting damage was so severe that the 1903 flight season ended that morning.

The brothers were ambivalent about how much to tell the world of their breakthrough achievement, but after eating lunch, they walked four miles to the Kitty Hawk, North Carolina, weather station and sent this telegram to their father, instructing him to “inform press.” The message went from this station to Norfolk, Virginia, where it was relayed to Western Union for transmittal to Dayton, Ohio. In transmission the fifty-nine seconds became fifty-seven, and Orville Wright’s first name was spelled “Orevelle.” The Wright family had anticipated success and had a strategy for disseminating the information. Lorin Wright, Wilbur and Orville’s brother, took the telegram and copies of a typewritten statement, which had already been prepared by their father, to local newspaper editors, who gave the story limited exposure. In the meantime, the Norfolk telegraph operator leaked the story to the city’s Virginian-Pilot, which not only gave it banner treatment, but exaggerated details and introduced fictions, which later became hard to eradicate.

by Marvin W. Kranz, in Words and Deeds in American History. 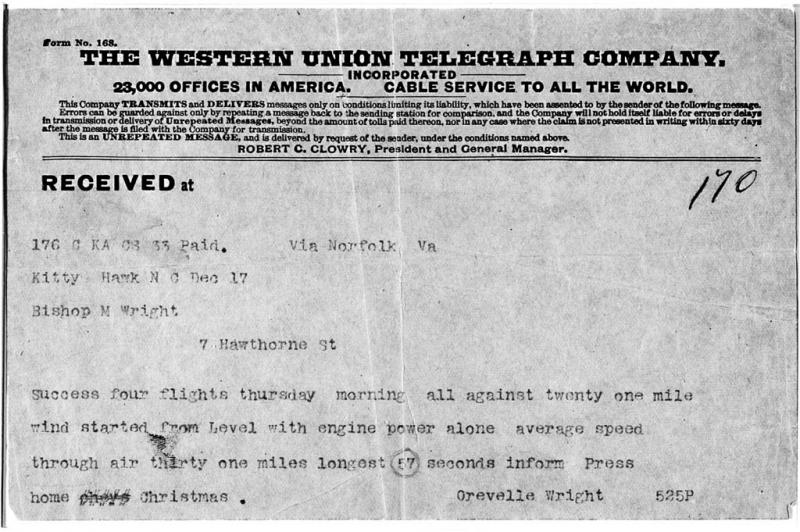