Appendix I: Remembering the Revolution

This painting, The Apotheosis of Washington, is painted in the eye of the Rotunda of the U.S. Capitol -- directly overhead, in the top of the dome. It is a fresco, meaning that it was painted directly into wet plaster. This technique was widely used during the Italian Renaissance, most famously by Michelangelo in the Sistine Chapel.

The fresco was painted in 1865 by Constantino Brumidi. Brumidi (1805-1880) was born and trained in Rome and had painted in the Vatican and Roman palaces before emigrating to the United States in 1852. A master of creating the illusion of three-dimensional forms and figures on flat walls, Brumidi painted frescoes and murals throughout the Capitol from 1855 until his death. The canopy fresco, his most ambitious work at the Capitol, was painted in eleven months at the end of the Civil War, soon after the new dome was completed, for $40,000. Suspended 180 feet above the Rotunda floor, it covers an area of 4,664 square feet. The figures, up to 15 feet tall, were painted to be intelligible from close up as well as from 180 feet below. Some of the groups and figures were inspired by classical and Renaissance images, especially by those of the Italian master Raphael.

The word apotheosis means literally the raising of a person to the rank of a god, or the glorification of a person as an ideal. George Washington was a national icon, or symbol of the American nation, in the nineteenth century. In this painting, Washington is portrayed as a god in heaven, surrounded by scenes that represent the nation he helped to found.

The painting as a whole

Adapted from Architect of the Capitol. 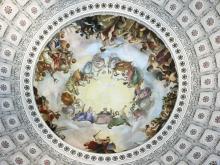