The struggle of African Americans for equality reached its peak in the mid-1960s. After progressive victories in the 1950s, African Americans became even more committed to nonviolent direct action. Groups like the Southern Christian Leadership Conference (SCLC), made up of African-American clergy, and the Student Nonviolent Coordinating Committee (SNCC), composed of younger activists, sought reform through peaceful confrontation.

In 1960 African-American college students sat down at a segregated Woolworth's lunch counter in North Carolina and refused to leave. Their sit-in captured media attention and led to similar demonstrations throughout the South. The next year, civil rights workers organized "freedom rides," in which African Americans and whites boarded buses heading south toward segregated terminals, where confrontations might capture media attention and lead to change.

They also organized rallies, the largest of which was the "March on Washington" in 1963. More than 200,000 people gathered in the nation's capital to demonstrate their commitment to equality for all. The high point of a day of songs and speeches came with the address of Martin Luther King Jr., who had emerged as the preeminent spokesman for civil rights. "I have a dream that one day on the red hills of Georgia the sons of former slaves and the sons of former slave owners will be able to sit down together at the table of brotherhood," King proclaimed. Each time he used the refrain "I have a dream," the crowd roared.

The level of progress initially achieved did not match the rhetoric of the civil rights movement. President Kennedy was initially reluctant to press white Southerners for support on civil rights because he needed their votes on other issues. Events, driven by African Americans themselves, forced his hand. When James Meredith was denied admission to the University of Mississippi in 1962 because of his race, Kennedy sent federal troops to uphold the law. After protests aimed at the desegregation of Birmingham, Alabama, prompted a violent response by the police, he sent Congress a new civil rights bill mandating the integration of public places. Not even the March on Washington, however, could extricate the measure from a congressional committee, where it was still bottled up when Kennedy was assassinated in 1963.

President Lyndon B. Johnson was more successful. Displaying negotiating skills he had so frequently employed during his years as Senate majority leader, Johnson persuaded the Senate to limit delaying tactics preventing a final vote on the sweeping Civil Rights Act of 1964, which outlawed discrimination in all public accommodations. The next year’s Voting Rights Act of 1965 authorized the federal government to register voters where local officials had prevented African Americans from doing so. By 1968 a million African Americans were registered in the deep South. Nationwide, the number of African-American elected officials increased substantially. In 1968, the Congress passed legislation banning discrimination in housing.

Once unleashed, however, the civil rights revolution produced leaders impatient with both the pace of change and the goal of channeling African Americans into mainstream white society. Malcolm X, civil rights activist and black nationalist leader, was one of the most prominent figures arguing for African-American separation from the white race. Stokely Carmichael, a student leader, became similarly disillusioned by the notions of nonviolence and interracial cooperation. He popularized the slogan “black power,” to be achieved by “whatever means necessary,” in the words of Malcolm X.

Violence accompanied militant calls for reform. Riots broke out in several big cities in 1966 and 1967. In the spring of 1968, Martin Luther King Jr. fell before an assassin's bullet. Several months later, Senator Robert Kennedy, a spokesman for the disadvantaged, an opponent of the Vietnam War, and the brother of the slain president, met the same fate. To many these two assassinations marked the end of an era of innocence and idealism. The growing militancy on the left, coupled with an inevitable conservative backlash, opened a rift in the nation's psyche that took years to heal.

Affirmative action is a name for policies that encourage employment of minorities or their admission to colleges and universities. Some policies and laws simply require people of all races to be given equal opportunities, while others require that people of various races are hired or admitted in numbers that reflect the overall population.

By then, however, a civil rights movement supported by court decisions, congressional enactments, and federal administrative regulations was irreversibly woven into the fabric of American life. The major issues were about implementation of equality and access, not about the legality of segregation or disenfranchisement. The arguments of the 1970s and thereafter were over matters such as busing children out of their neighborhoods to achieve racial balance in metropolitan schools or about the use of “affirmative action.” These policies and programs were viewed by some as active measures to ensure equal opportunity, as in education and employment, and by others as reverse discrimination.

The courts worked their way through these problems with decisions that were often inconsistent. In the meantime, the steady march of African Americans into the ranks of the middle class and once largely white suburbs quietly reflected a profound demographic change. 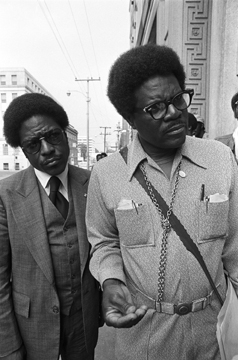 Golden Frinks, known as "The Great Agitator" for his role in the Civil Rights Movement in North Carolina. 1976. Copyright News & Observer, all rights reserved. Used with permission. Housed at NC State Archives, call no. NO_6009_Fr11.

Nina Simone- "An artist's duty, as far as I'm concerned, is to reflect on the times", jazz musician and Civil Rights activist.

Nina Simone: Putting Soul into the Protest for K-8 Students