For centuries, black people have been oppressed in different ways by the laws of North Carolina. Before the Civil War, most were enslaved. Those who were free were bound by stricter laws than white people. Free black people prior to the Civil War could not vote or engage in most occupations. After the 1860s, enslaved people were freed, and black people received some rights such as the right to earn wages and serve on juries. Although no longer enslaved, black Americans were constrained and harmed by the Jim Crow system. The Jim Crow system was a combination of legal and cultural practices that kept black people separate from white people and deprived them of basic social, economic, and civil rights.

The term “Jim Crow” was used to describe discriminatory laws and practices from the late 19th to the mid-20th century. The term originated from a minstrel song, “Jump Jim Crow,” performed in the 1830s. Thomas Rice, a white performer in blackface, became known for performing the song. People viewed it as a tune and dance that mocked African Americans. Over time, “Jim Crow” became an insulting term for black Americans. The term was first used to describe laws in 1884 when it was used in reference to legislation in Louisiana. It later became a term for racially discriminatory laws, customs, and practices.

The Jim Crow system had two major components: legalized segregation and cultural segregation. One after another, states passed laws requiring separate accommodations for black and white people for schools, railroad cars, water fountains, and more. States enacted these laws at different times and in different ways. North Carolina’s Jim Crow era roughly began in 1868 when the new state constitution called for separate schools for black students and white students. This law was followed by a law banning interracial marriage in 1872. Later on, new laws required separate school books for white and black students (1889) and segregated railcars (1899) and streetcars (1907). In 1900, the state passed a constitutional amendment requiring poll taxes and biased literacy tests. These measures barred nearly all black people from voting. So-called “grandfather” clauses allowed poor and illiterate whites to continue voting. The loss of the vote by black North Carolinians kept the system in place for decades.

In addition to official laws that treated black people differently than white people, Jim Crow was a cultural force. Black Americans were treated as inferior in nearly every way. Social norms forced them to defer to whites in public. Black Americans had to step aside from white people walking on sidewalks. Men had to avoid making eye contact with white women. Black Americans could not take on high-status jobs or live in white neighborhoods. Those who did not follow these strictures could be subject to lynching or race massacres. Two of the most notable massacres destroyed much of Wilmington, North Carolina, in 1898 and Tulsa, Oklahoma, in 1921.

Given this situation, many black Americans left the South. This mass relocation of black people from the American South, called the Great Migration, took place between the years of 1917 and 1940. During the Great Migration, approximately two million black Americans moved away from southern states and to cities in the North and Midwest such as New York, Chicago, Detroit, and Pittsburgh. In North Carolina, the total population doubled between 1900 and 1950, but the black population increased by only 30 percent during that same period.

Black activists, citizens, lawyers, and educators fought unequal treatment in the Jim Crow South constantly. They organized campaigns and launched court cases. These efforts led to several victories in the late 1940s and early 1950s. In 1948, President Harry Truman desegregated the armed forces. In 1954, the Brown v. Board of Education Supreme Court ruling began the long process of school desegregation. Martin Luther King, Jr. led the Montgomery bus boycotts of the next year. North Carolina played a central role as well. Greensboro was the site of an early sit-in. The state’s governor in the early 1960s, Terry Sanford, supported civil rights. In a famous 1963 speech, Governor Sanford urged North Carolinians to “quit unfair discriminations, and to give the Negro a full chance to earn a decent living for his family and to contribute to higher standards for himself and all men.”

But Jim Crow remained in force until the Civil Rights Act of 1964 and the Voting Rights Act of 1965. These laws banned segregation and gave black Americans the right to vote. With these legal changes, the legal presence of Jim Crow was weakened. The legacies of Jim Crow are with us today. Political and legal disputes over segregation continue to the present. Unfair treatment remains. But the legal and cultural mistreatment that harmed black people during the Jim Crow era is, in many ways, over.

Thomas Dartmouth Rice popularized "Jump Jim Crow," and is known as the "Father of Minstrelsy."

On The Books: Jim Crow and the Algorithms of Resistance Project

Behind the Veil: Documenting African American Life in the Jim Crow South

from Facing History & Ourselves 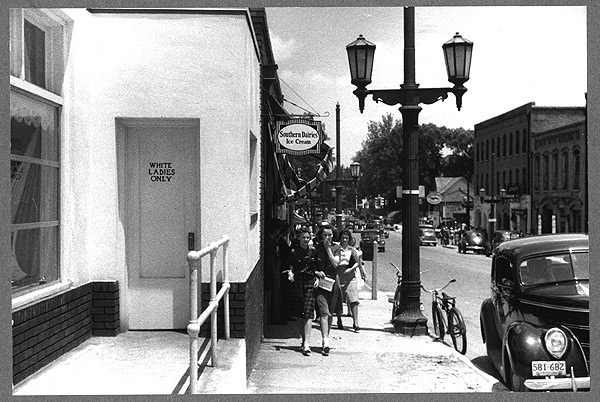 "White Ladies Only" sign on the restroom at a bus station in Durham, North Carolina, in 1940. Source: Jack Delano, May 1940, Library of Congress Prints and Photographs Division, Washington, DC.

Sheet music for the "Jump Jim Crow" song. From Library of Congress.