Land Ownership and Labor in Carolina

This book page explains the key elements of feudalism, including its hierarchy of personal relationships and system of landholding, and how those elements evolved into the systems of labor and land ownership seen in colonial North Carolina.

When North Carolina was founded in the 1600s, Europe was still, in many ways, emerging from the Middle Ages. Medieval traditions, laws, and beliefs still had an influence in early colonial America. At the same time, European and colonial society was becoming more modern -- more like the world of today.

In order to understand fully some of what was going on in early colonial North Carolina, we actually have to go back hundreds of years to the Middle Ages, when England was a feudal society. For now, we'll look at two aspects of colonial society that look as much like medieval Europe as like modern America: the ways people bought, sold, and owned land, and the relationships people had regarding their work.

Under a feudal system, people receive grants of land in exchange for military service. For our purposes, though, it's useful to think of a feudal society as one in which personal relationships mattered more than universal laws and in which land was the one really important kind of property.

Feudalism began to evolve in the early Middle Ages, after the Roman Empire fell in the fifth century CE, when conditions in Europe were chaotic. Tribes of Germans, Vikings, and Magyars (from what is now Hungary) swept across Europe in what are sometimes called the "barbarian invasions." Crime was rampant. What was left of central governments had very little power. The last emperors in Europe granted land to nobles in exchange for their loyalty, and peasants turned to landowners for protection.

Eventually, feudalism became a complicated and formal system, governed by a dizzying array of laws and customs. The strongest lords became more powerful, and some became kings. The essence of feudalism remained the same, though: Everyone, from the lowest peasant to the king, was bound to one another by personal ties of loyalty and service.

Although there were a few exceptions, feudalism was the rule in Europe from about the ninth to the fourteenth centuries. No one "owned" land in the way we think of land ownership today, with the right to buy, sell, or rent it as he pleased; instead, people had tenure -- a bundle of rights to use land that came with certain restrictions and duties. Everyone (except the king himself) was obligated to someone else -- expected to provide service whenever he was asked. And the vast majority of people were serfs, with few rights and almost no power.

Towards a "modern" World

As time went on, society grew more stable. Armored knights were replaced by armies (and later navies) that resembled modern fighting forces. The economy was no longer based entirely on agriculture, and landowners looked for new ways to make money. Commerce and banking grew, and towns became more important.

Peasants Off the Land

To accommodate changes in society and the economy, Europeans devised new ways of managing land. As laws changed, many peasants were thrown off the land their families had worked for generations. They might hire themselves out as agricultural workers, or they might move to a city. This new class of people -- with more freedom than serfs, but few rights and little opportunity -- was the source of many of the indentured servants (see below) who migrated to England's colonies in North America.

The old system of granting land in exchange for military or other service became less useful. Nations increasingly fought their wars with professional armies, not by asking barons to call on their knights. What lords and barons wanted now was money -- to finance a business or buy luxury goods from Asia or America. Increasingly, landholders could pay their lords a quitrent -- an annual cash payment that freed or "quit" them from their obligation to provide military service or work. (In 1660, Parliament passed a law converting all land tenures to this kind of relationship.)

In England, quitrents functioned like modern rents, in which the person occupying a piece of land pays a landlord for the privilege of living there. (In fact, the word "landlord" derives from the idea of a medieval lord who controlled a piece of land.) In North Carolina, since quitrents were paid to the Lords Proprietors to cover the costs of governing the colony, they functioned more like modern property taxes, in which people pay an annual tax based on the value of their property.

Old and New in Carolina

Charles II's grant of Carolina to the Lords Proprietors was a feudal grant of land, though he was rewarding them for past loyalty and didn't require any specific future services from them. The Lords Proprietors reserved much of the land for their own use, but they made further grants of land in exchange for quitrents.

In the Fundamental Constitutions of Carolina, the Lords Proprietors tried to establish some of the elements of a feudal system. They created new titles of nobility, landgraves and caziques, who would be like English barons. They envisioned manors with lords and serfs whom they called "leet-men," whose status would be hereditary.

But the complicated feudal system the Lords Proprietors had in mind had evolved over centuries in England, and Carolina was nothing like the England of 1663. It was already occupied by native peoples who wanted no part of a European government and partially settled by white men who had full rights to their land. At the same time, unlike Europe, where all land had been owned and controlled for centuries, Carolina had vast tracts of land that colonists could obtain cheaply and where there was no effective government. And men and women in England who had the freedom to travel to America had no desire to become hereditary serfs. A tightly controlled, heirarchical system simply wasn't going to work in colonial Carolina.

Many early grants of land were in the form of headrights. Headrights gave 100 acres of land to every man who paid his own way to Carolina, and additional land for every servant. This system had been used in Virginia since 1618, and was the basis of most of the land ownership there. (The grants were called “headrights” because land was given per head, or per person. Today we use the word “head” in this way only to describe livestock, such as "head of cattle.") For younger sons of landed families in England, who could not inherit family land because of primogeniture laws, headrights were a way to obtain land.

Only men who owned land could take part in government. This system, too, had its origins in the Middle Ages and feudalism. In medieval England, Parliament was made up of two houses: The House of Lords included all nobles with an inherited title, while the House of Commons represented knights who owned land and free men in towns. Peasants had no say in government at all.

In colonial Carolina, the Lords Proprietors established a representative assembly, but land ownership was still a requirement for voting. In America, though, many more people owned land than in England, and so the colonial government was more "representative" than the English Parliament.

Although people generally had more personal freedom and economic opportunity in colonial America than they did in Europe, most people were not "free" by the standards of the twenty-first century United States. Carolina never had manors and serfs, but there were classes of people in colonial America who were not paid for their work, but were obligated to someone else.

Apprenticeship is a system of training craftsmen or skilled workers. In colonial America, as in England at the time, apprenticeship was almost the only way someone could learn a craft such as blacksmithing, carpentry, shoemaking, or printing.

Apprentices in early modern England and colonial America left their parents at a young age -- often about 14 -- and lived with the family of a skilled craftsman. The craftsman taught the apprentice the skills of his trade and fed, clothed, and housed him. In exchange, the apprentice worked for the craftsman for a period of time, usually seven years.

Because North Carolina was mainly an agricultural society, apprenticeship wasn't as common there as it was in the northern colonies or in England. As towns grew and could support skilled artisans, apprenticeship became more common.

Headright grants encouraged a system of indentured servitude. Wealthy men in England paid transportation costs of poorer men and women, who became their servants in America. The servants were bound to work the land for five to seven years, during which time they were not free to leave their master or disobey him. At the end of their servitude, the servant was given clothing and basic tools and set free. A freed servant was granted a small piece of unoccupied land (ten acres to a man, six to a woman) -- not enough for a self-sustaining farm, but a freed servant could borrow money from his master to buy additional land.

The most extreme form of unfree labor was slavery. The kind of slavery practiced in America is sometimes called "chattel slavery" -- chattel meaning a personal possession. Unlike indentured servants, enslaved people were enslaved for life, and the children of those enslaved people were born enslaved themselves. Unlike the peasants of medieval Europe, they were legally the property of their enslavers and had almost no legal protections at all. Enslaved people could be bought and sold, like any other form of property.

Europeans didn't enslave other European Christians. They reserved slavery for people they believed to be beneath them or who they believed were outside the bounds of civilized society, including American Indians and Africans imported from West Africa. 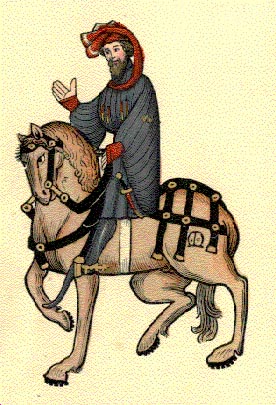 A knight was part of a long chain of personal relationships that made up a feudal society. 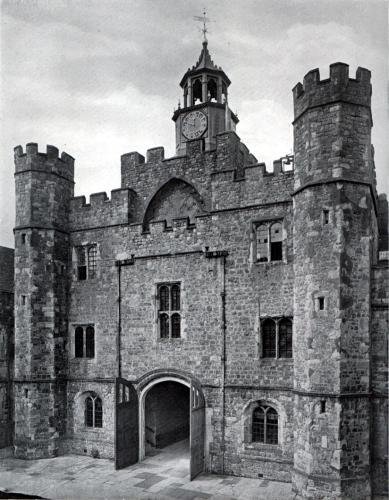 Manor houses in late medieval England, like this one built about 1457, could be very large and elaborate.