Nat Turner’s rebellion was one of the largest slave rebellions ever to take place in the United States, and it played an important role in the development of antebellum slave society. The images from Nat Turner’s Rebellion -- of armed black men roaming the country side slaying white men, women, and children -- haunted white southerners and showed slave owners how vulnerable they were. Following the rebellion, whites throughout the South were determined to prevent any further slave insurrections, and they tightened the already harsh slave codes to keep African Americans, slave and free, in a subservient position.

Nat Turner was born in 1800 into slavery in Southampton, Virginia, about twenty miles from the North Carolina border. Turner's experience was typical of slaves on southern plantations. He had little freedom; he could not legally marry, travel without his master's permission, own property, or earn money. He was forced to work long, hard hours in the fields for meager rations of food and clothing, and if he refused he faced the whip or other punishment. And, like many slaves, Turner was sold several times to different masters. Each time, he was forced to leave family and friends and move to a different plantation. It was this brutal, demeaning, system of slavery that Nat Turner sought to overthrow. He sought not only his own freedom, but to dismantle the entire system of slavery and liberate African Americans from white tyranny.

In his twenties, Turner was a spiritual leader among his fellow slaves, and many people, including his mother and grandmother, believed that he had been chosen by God to do great things. Then, in the 1820s, he had a series of visions through which he believed God was commanding him to prepare himself for a great battle against evil. During the religious revivals of the Second Great Awakening, many Americans from all walks of life experienced visions or believed that God spoke directly to them, and Nat Turner’s belief that God had destined him for a special purpose reflected the religious fervor of his time. But the purpose for which he believed God had chosen him was extraordinary. In February 1831, a solar eclipse seemed to Turner to be the sign he was waiting for, and he began preparations for an insurrection. On August 13, the sun appeared blue-green in the sky, and Turner and his friends took this as the final sign.

On August 22, 1831, Nat Turner and six fellow slaves began their attack. Their plan was to move systematically from plantation to plantation in Southampton and kill all white people connected to slavery, including men, women, and children. They started on their own plantation and murdered Turner’s owner and his family. During the next twenty-four hours, Turner and his fellow insurgents moved throughout the county to eleven different plantations, killing fifty-five people and inspiring fifty or sixty enslaved men to join their ranks. They then moved on to the town of Jerusalem with the intention of destroying the town and killing all the inhabitants. But before they could reach their destination, they were stopped by a heavily armed white militia. The Governor had called about three thousand militiamen to put down the rebellion. Seeing that they were greatly outnumbered, the insurgents disbanded, and many fled into the woods and swamps.

The white militia hunted down and soon captured or killed the men who had participated in the rebellion, except for Nat Turner. For two months Turner hid in the woods of Southampton County. When he was finally captured, he was tried, convicted, and then hanged and his body skinned. Fifty-four other men were executed by the state. In addition, to terrorize the local African American population, some of the militia decapitated about fifteen of the captured insurgents and put their heads on stakes. Then, as fear spread through the white population, white mobs turned on blacks who had played no role in the uprising. An estimated two to three hundred African Americans, most of whom were not connected to the rebellion, were murdered by white mobs. The governor of Virginia tried to put a stop to this vigilante justice, insisting that those who had participated in the rebellion should be tried and executed by the state to reinforce the supremacy of the law for both blacks and whites. In the aftermath of the rebellion, the state legislature of Virginia considered abolishing slavery, but instead voted to tighten the laws restricting blacks' freedom in hopes of preventing any further insurrection.

In nearby North Carolina, several slaves were accused -- falsely -- of being involved in Turner’s rebellion and executed. Rumors spread that slaves in North Carolina were plotting their own uprising, and white mobs murdered a number of enslaved men, while other slaves were arrested, tried, and a few executed. North Carolina, like Virginia, passed new legislation further restricting the rights of both enslaved people and free blacks. The legislature made it illegal for slaves to preach, to be "insolent" to white people, to carry a gun, to hunt in the woods, to cohabitate with a free black or white person, to own any type of livestock. These new codes also forbade white people from teaching an enslaved person to read.

insurrections, and they tightened the already harsh slave codes to keep African Americans, slave and free, in a subservient position." data-share-imageurl=""> 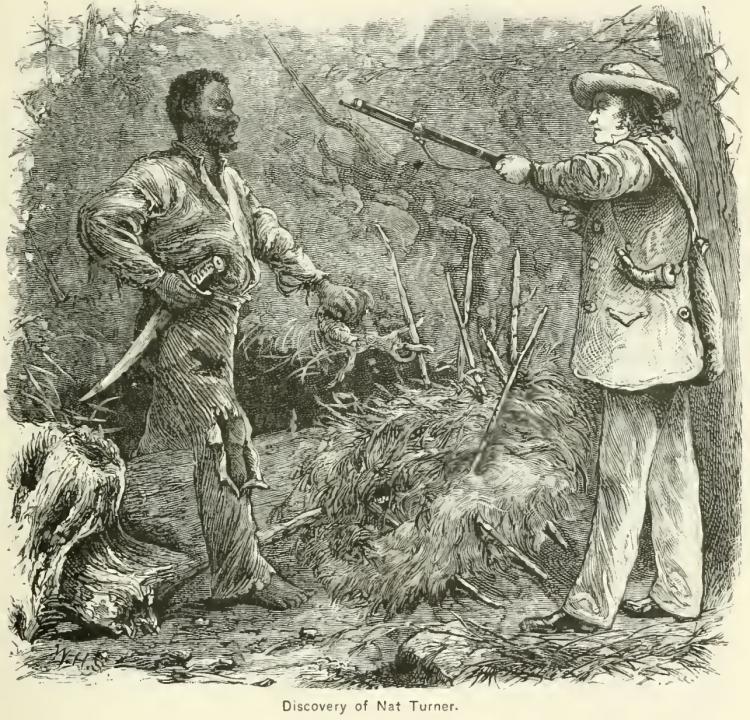 This illustration depicting the capture of Nat Turner appeared in the 1882 book A Popular History of the United States.