By the 1830s, North Carolina had several newspapers being published at varying intervals. One of these newspapers was The Carolina Watchman, published in Salisbury (Rowan County) from 1832 to 1867.

With limited other means of communicating to a large audience, many enslavers looking to locate freedom seekers as well as those preparing to sell enslaved people would place ads in newspapers. Some of these ads from the Carolina Watchman are featured below, along with transcriptions.

RANAWAY from the subscriber on 19th of November, a negro man, named TIM about 45 years of age, black complexion, about five feet four or five inches high, has a stoppage in his speech. He professes to be a very devout Baptist. Having purchased him in Montgomery county, not far from Stokes' Ferry, my opinion is, that he is in that neighborhood. I will give the above reward for his apprehension and delivery to me.

RANAWAY from the subscriber two negro slaves, viz TONEY and JOHN. Toney is about 35 years of age, five feet nine or ten inches high, dark complexion, square and stout build and had on when he left, a bright drab PetershamPetersham was a rough, knotted woolen cloth. overcoat. He was purchased by me of Mr. Richard Brasley of Wilmington, and calls himself Toney Montague. John is about twenty years of age, of rather lighter complexion than Toney, about five feet 10 inches high, and is quite stout built -- he has a full round face, and has lost two front teeth above and below which is his most distinguishing mark. He had on when he left, a light grey woolen round Jacket and pantaloons. The above slaves left the camp of the subscriber while on his way to the Western country, eight miles above Lincolnton, on 28t of last month, and will no doubt endeavor to make their way back to Wilmington. The above reward will be given for their apprehension, so that I get them again.

RANAWAY from the subscriber living near Liberty Hill, in Iredell county, N.C., a negro man named PETER, formerly owned by James Cunningham. He is between forty and fifty years old; of a yellowish complexion -- round face and small eyes. He is marked with a scar in one of his ears, which has not grown together; also with a scar on the underside of his heel; which has not filled up; he has also a small scar on one of his cheeks and is about five feet, five or six inches in height. Any one taking up this negro and lodging him in jail or delivering him to me, shall be reasonably compensated.

Court of Please and Quarter Sessions, Novem- ber Term, 1836 William Davis, Adm'r & Ex'r Expartae Pursuant to an order of Court, the subscriber will expose to public sale, at Mount Airy, Surry Co. on the 6th day of January next, on a credit of six months, TWELVE likelyLikely in this sense meant that the person appeared strong, capable, or vigorous. Negroes, Consisting of a likely fellow, two women, and nine well grown children The purchasers will be required to give bond with approved security.

IN pursuance of an order of the Cabarrus County Court, made at October Sessions 1836, I will sell at the Courthouse door in Concord, on the 3d Monday in February next a Negro Boy named NATHAN, the property of W.P. Stackton, dec'd, for cash.

THE Subscriber will purchase any number of likely young NEGROES during the next six months, for which liberal prices in cash will be given. I wish all letters on business, addressed to me at Germanton, Stokes County.

from the Digital Library of American Slavery

Freedom on the Move: A database of fugitives from American Slavery 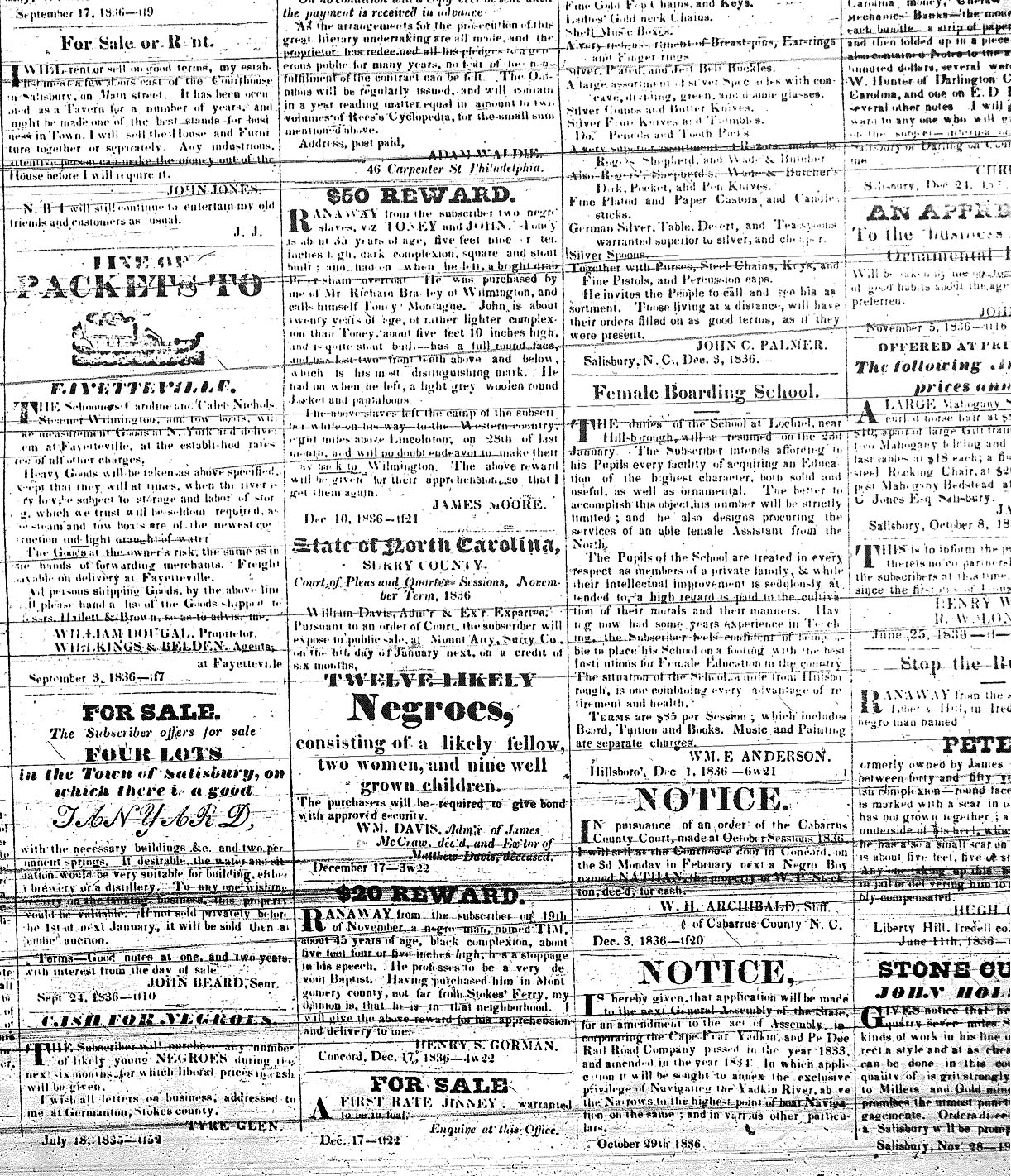 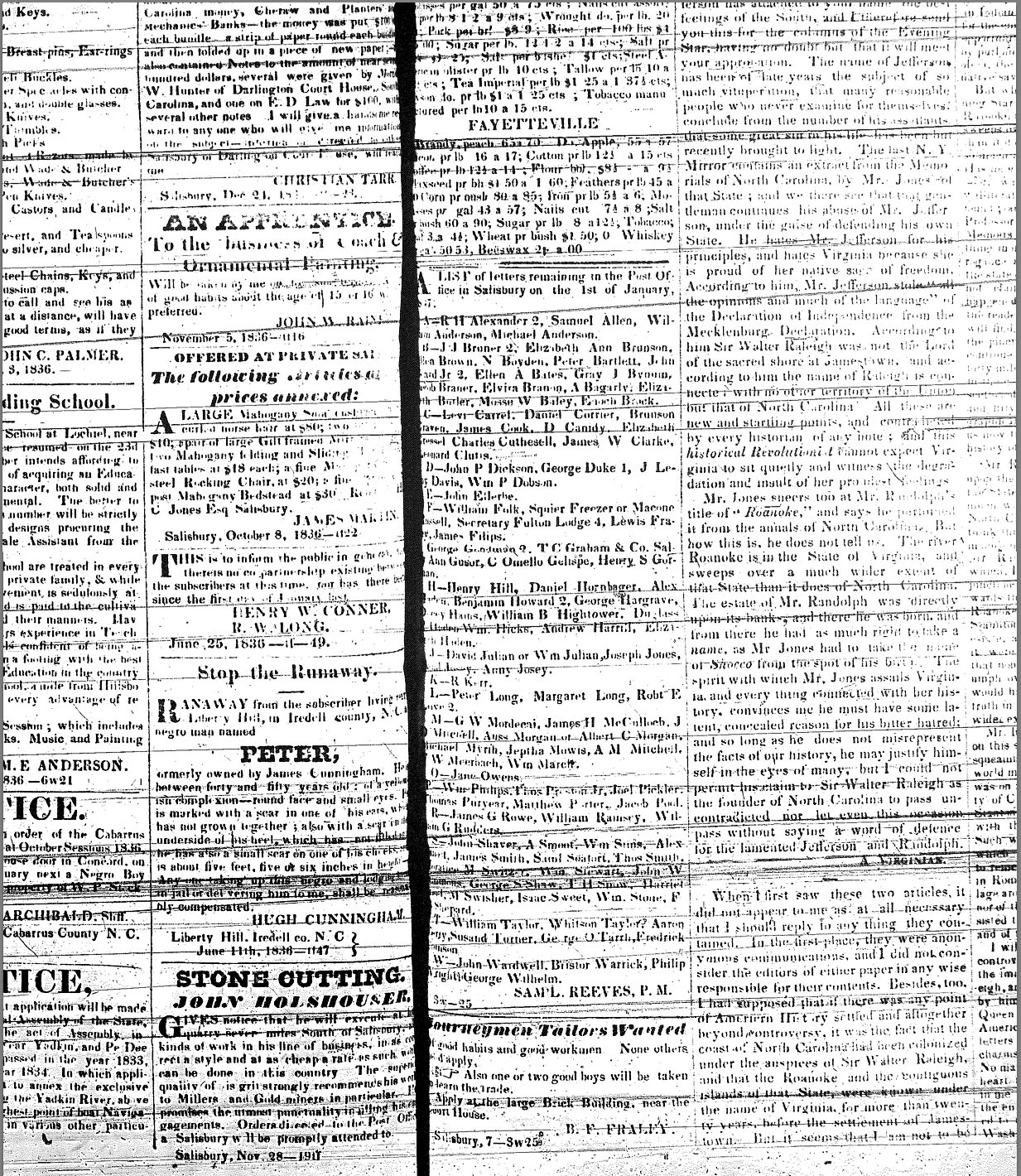 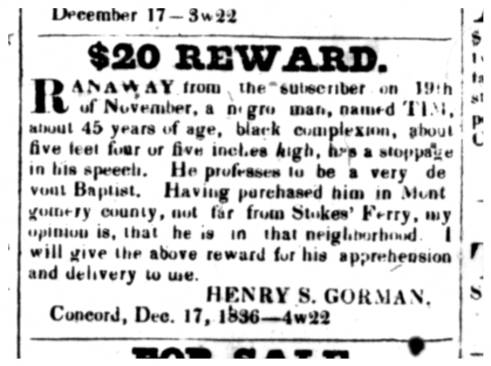 Ad advertising a reward for a runaway slave -- Tim -- published in the December 17, 1836 edition of the Carolina Watchman. 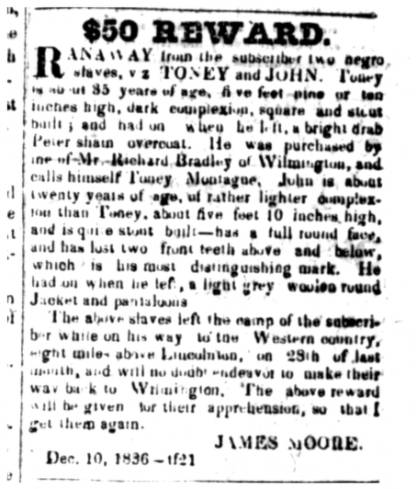 Ad advertising a reward for two runaway slaves-- Toney and John -- published in the December 10, 1836 edition of the Carolina Watchman. 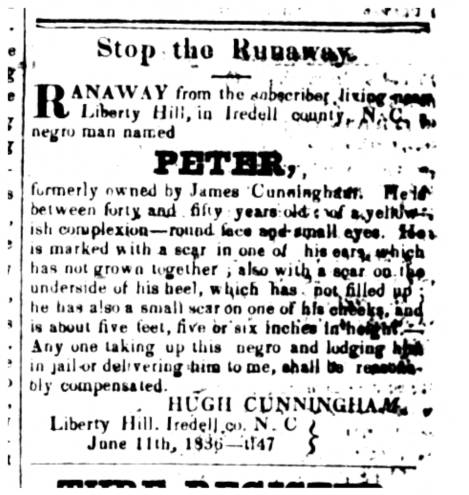 Ad advertising a reward for a runaway slave -- Peter -- published in the June 11, 1836 edition of the Carolina Watchman.