Feeding 3.5 million soldiers and sailors on active duty strained the nation’s farms to the limit. Worse, the war took men and women off the farm to serve in the military or work in war-related industries. By late 1942, less than a year into the war, many cities faced food shortages, as this article from Time magazine shows.

U.S. At War: To End Blundering? (Time, December 21, 1942)
To do a job long left undone, Food Czar Claude Wickard last week put the Department of Agriculture on a wartime basis and picked two energetic lieutenants to help him. The job: to end doodling over a food situation that is rapidly getting out of hand.

Americans blamed the government for not getting involved sooner, and by January 1943, rationing had been imposed. Sugar and coffee had already been rationed; now meats, fats, and canned foods were added to the list. This article from Life magazine prepared consumers for what was coming.

Canned Foods on Ration List (Life, January 11, 1943)
America’s canned foods are world’s best and most abundant, but now they must be rationed so that civilians may have an adequate and equal supply.

But not only food was rationed. Tires, gasoline, household goods, shoes — almost anything needed for the war effort, or made from materials needed from the war effort, was rationed. Americans on the home front collected scrap metal and scrap paper to turn in. Even waste cooking fats could be used to make explosives, as this radio announcement reminded listeners.

Sacrificing for the Common Good: Rationing in WWII
from the National Park Service

Rationing: A Necessary But Hated Sacrifice
from the Oregon State Archives

from the Cape Fear Museum 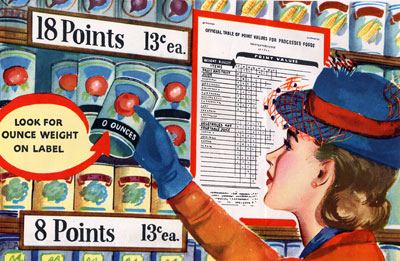 Posters gave shoppers advice on how to use their ration books. Image and caption courtesy of the Oregon State Archives.