The Search for the Lost Colony

No one knows what happened to the "Lost Colonists" of Roanoke Island -- but that has only made their story more interesting. Over the past 400 years, historians, archaeologists, storytellers, and outright liars have developed a number of theories about the vanished settlers.

It seems likely that some, if not all, of the colonists went to live among the native peoples of the Outer Banks. John White believed that they had gone to live with the Hatteras (Croatan) Indians under Manteo. Many Lumbee now living in Robeson County believe that they are descended in part from the Roanoke colonists and the Hatteras Indians. They cite their light complexions, blue eyes, and names that are the same as the names of the Roanoke colonists. Some historians and anthropologists agree that this is likely true, but there is no hard evidence. Some attempts are now being planned to use DNA testing to determine whether the Lumbee are, in fact, descended from the Lost Colonists.

A "young mayde" in the Chesapeake

Twenty years after the Roanoke colonists disappeared, settlers at Jamestown heard reports that they were living nearby in the Chesapeake region. In 1612, William Strachey, the first secretary of Jamestown colony, wrote a history of that colony caled History of Travaile into Virginia Brittania, in which he related a story he had heard about the fate of the Roanoke colonists. According to this story, some of the colonists had fled northward and lived peacefully for twenty years with the Chesepian (Chesapeake) Indians. Shortly before the Jamestown colonists arrived in Virginia, though, Chief Powhatan, the ruler of most of the tribes of that region, had "miserably slaughtered" the English and Chesepian. But Strachey also heard that seven colonists escaped the massacre, including a "young mayde." Since Virginia Dare would have been in her early twenties, some people believe that she was the young maid, or girl, whom Strachey mentioned.

Some historians combine these two theories and argue that the colonists divided. Most went north toward the Chesapeake, where they had originally intended to settle. The rest were left behind to wait for John White, but eventually abandoned the fort and went to live among the Croatan. Recent evidence -- long-lost documents in a Spanish archive -- shows that they didn't last long: In June, 1588, a Spanish raiding party arrived in Roanoke but found the settlement already deserted.

Some stories of the Lost Colony are more fanciful. In one legend that still endures in eastern North Carolina, Virginia Dare becomes a white doe. 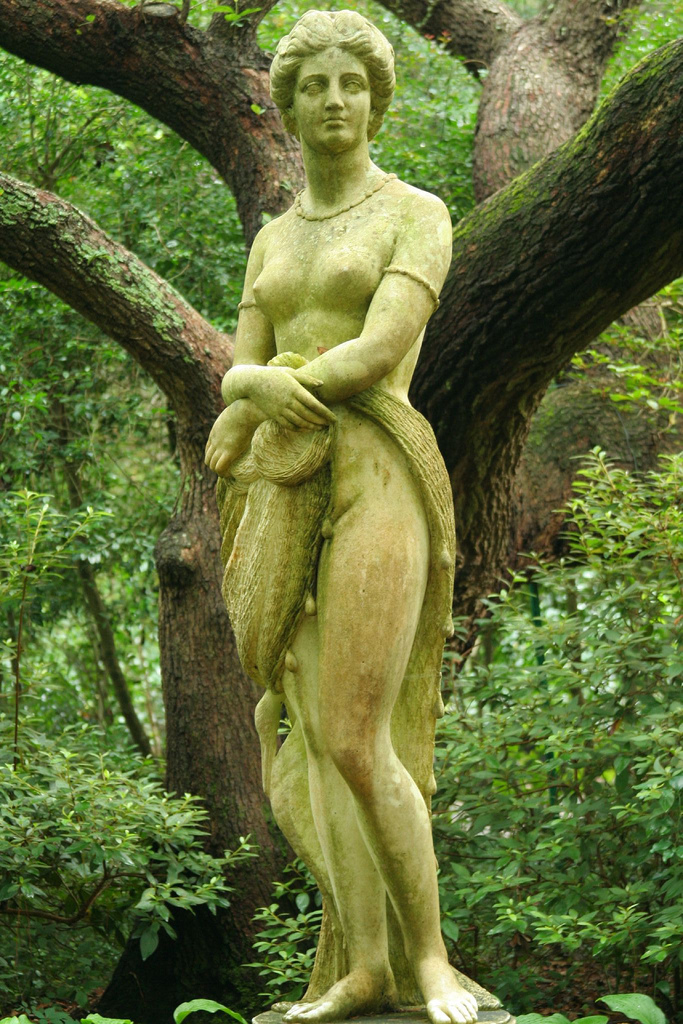 Sculptor's interpretation of Virginia Dare as an adult, at the Elizabethan Gardens in Manteo, NC The White Doe: The Fate of Virginia Dare, a long narrative poem written by Sallie Southall Cotten in 1901, tells the story of the young English girl growing up among the Croatan Indians, taking the name Winona-Ska. A handsome young chief, Okisko, wants to marry her, but a jealous conjurer turns her into a white doe. With the help of another conjurer Okisko tries to turn her back into a human girl, but through a twist of fate the doe is killed.

In the Land-of-Wind-and-Water
Roamed the Red Man unmolested.
While the babe of Ro-a-no-ak
Grew in strength and wondrous beauty;
Like a flower of the wildwood,
Bloomed beside the Indian maidens.
And Wi-no-na Skâ
they called her,
She of all the maidens fairest...1

In 1937, Paul Green, a Pulitzer Prize-winning playwright from North Carolina, wrote a play called The Lost Colony telling the story of the Roanoke settlement. Green's "outdoor drama," set on a massive scale and filled with symphonic music, was designed to be performed outdoors on Roanoke Island itself. The play was an exuberant celebration of America's origins designed to lift people's spirits during the Depression, and the theater in which it was performed was built as a project of Franklin Roosevelt's Works Progress Administration that created jobs for the unemployed. The Lost Colony is still peformed each summer in the theater at Fort Raleigh National Historic Site.

In 1937, a twenty-one-pound quartz stone was found in a swamp 60 miles west of Roanoke. On one side was a cross and the instruction "Ananias Dare & Virginia went hence Unto Heaven 1591." On the other were carvings that, when deciphered by faculty at Emory University, were a message from Eleanor Dare to her father, John White, that the colony had fled inland after an Indian attack.

The story told by the stone matched some of the details of Strachey's account, and a number of academics were taken in, including the president of the American Antiquarian Society and the vice-president of Brenau College in Georgia. During the next three years, nearly forty more stones were found in North Carolina, South Carolina, and Georgia. Together, they told a story of the colonists' journey through the southeast, ending in the death of Eleanor Dare in 1599.

The timing of the discovery, exactly 350 years after the English settlement of Roanoke, made the "Virginia Dare Stones" a perfect story, and the media jumped on it. In 1941, though, an article in The Saturday Evening Post revealed the "discoverers" of the stones to have staged an elaborate hoax.3 Paul Green pointed out that the story told by the stones seemed to have borrowed the character of Eleanor Dare stright from his play. The stones were quickly forgotten by most people, although a few have continued to believe in them.

It seems likely that some, if not all, of the colonists went to live among the native peoples of the Outer Banks. John White believed that they had gone to live with the Hatteras (Croatan) Indians under Manteo." data-share-imageurl="">

In this outdoor theater on Roanoke Island, Paul Green’s drama about the Lost Colony has been staged every summer for seventy years.