The United States in the 1790s

One of the last acts of the Congress of the Confederation was to arrange for the first presidential election, setting March 4, 1789, as the date that the new government would come into being. One name was on everyone's lips for the new chief of state – George Washington. He was unanimously chosen president and took the oath of office at his inauguration on April 30, 1789. In words spoken by every president since, Washington pledged to execute the duties of the presidency faithfully and, to the best of his ability, to "preserve, protect, and defend the Constitution of the United States."

When Washington took office, the new Constitution enjoyed neither tradition nor the full backing of organized public opinion. The new government had to create its own machinery and legislate a system of taxation that would support it. Until a judiciary could be established, laws could not be enforced. The army was small. The navy had ceased to exist.

Congress quickly created the departments of State and Treasury, with Thomas Jefferson and Alexander Hamilton as their respective secretaries. Departments of War and Justice were also created. Since Washington preferred to make decisions only after consulting those men whose judgment he valued, the American presidential Cabinet came into existence, consisting of the heads of all the departments that Congress might create. Simultaneously, Congress provided for a federal judiciary – a Supreme Court, with one chief justice and five associate justices, three circuit courts, and 13 district courts.

Meanwhile, the country was growing steadily and immigration from Europe was increasing. Americans were moving westward: New Englanders and Pennsylvanians into Ohio; Virginians and Carolinians into Kentucky and Tennessee. Good farms were to be had for small sums; labor was in strong demand. The rich valley stretches of upper New York, Pennsylvania, and Virginia soon became great wheat-growing areas.

Although many items were still homemade, the Industrial Revolution was dawning in the United States. Massachusetts and Rhode Island were laying the foundation of important textile industries; Connecticut was beginning to turn out tinware and clocks; New York, New Jersey, and Pennsylvania were producing paper, glass, and iron. Shipping had grown to such an extent that on the seas the United States was second only to Britain. Even before 1790, American ships were traveling to China to sell furs and bring back tea, spices, and silk.

At this critical juncture in the country's growth, Washington's wise leadership was crucial. He organized a national government, developed policies for settlement of territories previously held by Britain and Spain, stabilized the northwestern frontier, and oversaw the admission of three new states: Vermont (1791), Kentucky (1792), and Tennessee (1796). Finally, in his Farewell Address, he warned the nation to "steer clear of permanent alliances with any portion of the foreign world." This advice influenced American attitudes toward the rest of the world for generations to come.

A conflict took shape in the 1790s between America’s first political parties. Indeed, the Federalists, led by Alexander Hamilton, and the Republicans (also called Democratic-Republicans), led by Thomas Jefferson, were the first political parties in the Western world. Unlike loose political groupings in the British House of Commons or in the American colonies before the Revolution, both had reasonably consistent and principled platforms, relatively stable popular followings, and continuing organizations.

The Federalists in the main represented the interests of trade and manufacturing, which they saw as forces of progress in the world. They believed these could be advanced only by a strong central government capable of establishing sound public credit and a stable currency. Openly distrustful of the latent radicalism of the masses, they could nonetheless credibly appeal to workers and artisans. Their political stronghold was in the New England states. Seeing England as in many respects an example the United States should try to emulate, they favored good relations with their former mother country.

Although Alexander Hamilton was never able to muster the popular appeal to stand successfully for elective office, he was far and away the Federalists’ main generator of ideology and public policy. He brought to public life a love of efficiency, order, and organization. In response to the call of the House of Representatives for a plan for the "adequate support of public credit," he laid down and supported principles not only of the public economy, but of effective government. Hamilton pointed out that the United States must have credit for industrial development, commercial activity, and the operations of government, and that its obligations must have the complete faith and support of the people.

There were many who wished to repudiate the Confederation’s national debt or pay only part of it. Hamilton insisted upon full payment and also upon a plan by which the federal government took over the unpaid debts of the states incurred during the Revolution. He also secured congressional legislation for a Bank of the United States. Modeled after the Bank of England, it acted as the nation’s central financial institution and operated branches in different parts of the country. Hamilton sponsored a national mint, and argued in favor of tariffs, saying that temporary protection of new firms could help foster the development of competitive national industries. These measures – placing the credit of the federal government on a firm foundation and giving it all the revenues it needed – encouraged commerce and industry, and created a solid phalanx of interests firmly behind the national government.

The Republicans, led by Thomas Jefferson, spoke primarily for agricultural interests and values. They distrusted bankers, cared little for commerce and manufacturing, and believed that freedom and democracy flourished best in a rural society composed of self-sufficient farmers. They felt little need for a strong central government; in fact, they tended to see it as a potential source of oppression. Thus they favored states’ rights. They were strongest in the South.

Hamilton's great aim was more efficient organization, whereas Jefferson once said, "I am not a friend to a very energetic government." Hamilton feared anarchy and thought in terms of order; Jefferson feared tyranny and thought in terms of freedom. Where Hamilton saw England as an example, Jefferson, who had been minister to France in the early stages of the French Revolution, looked to the overthrow of the French monarchy as vindication of the liberal ideals of the Enlightenment. Against Hamilton’s instinctive conservatism, he projected an eloquent democratic radicalism.

An early clash between them, which occurred shortly after Jefferson took office as secretary of state, led to a new and profoundly important interpretation of the Constitution. When Hamilton introduced his bill to establish a national bank, Jefferson, speaking for those who believed in states' rights, argued that the Constitution expressly enumerated all the powers belonging to the federal government and reserved all other powers to the states. Nowhere was the federal government empowered to set up a bank.

Hamilton responded that because of the mass of necessary detail, a vast body of powers had to be implied by general clauses, and one of these authorized Congress to "make all laws which shall be necessary and proper" for carrying out other powers specifically granted. The Constitution authorized the national government to levy and collect taxes, pay debts, and borrow money. A national bank would materially help in performing these functions efficiently. Congress, therefore, was entitled, under its implied powers, to create such a bank. Washington and the Congress accepted Hamilton's view – and set an important precedent for an expansive interpretation of the federal government's authority.

from Outline of U.S. History. 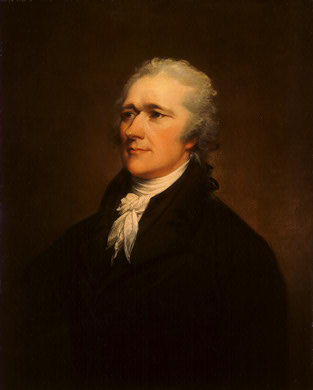 Alexander Hamilton led the Federalist party, one of the first two political parties in the United States. 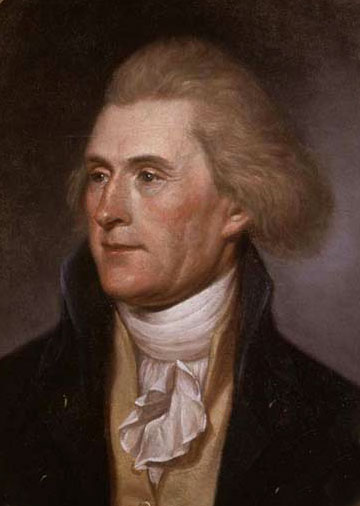 Thomas Jefferson led the Democractic-Republican party, one of the first two political parties in the United States.