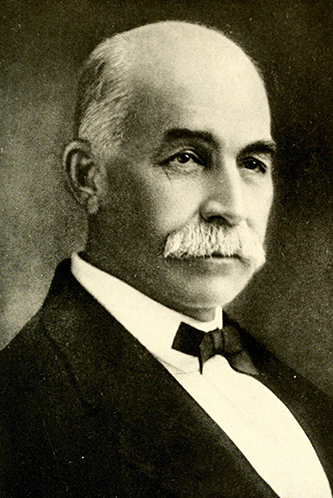 John Thomas Alderman, educator, Baptist historian, and Mason, was born in Salemburg, Sampson County. His father was Amariah Biggs Alderman (1819–89), a Baptist minister in Sampson and adjoining counties; his mother was Penelope Eliza Howard. His primary and secondary education was obtained at home under the direction of his parents. He attended Wake Forest College in 1872–73 and in 1873 began his career in education by teaching in a local school. He returned to Wake Forest College in 1876 and was graduated with an A.B. degree in June 1880. Alderman taught school at Newton Grove until 1881. From 1882 to 1891 he was principal of Fork Academy, Davie County, and from 1883 to 1891 he served as superintendent of the Davie County schools. He was superintendent of the Reidsville schools, 1892–94, and in 1894 became superintendent of schools in Talapoosa, Ga. After a year there he went on to become principal of City High School, Columbus, Ga. In 1899 he returned to Henderson, N.C., where he organized the school system and served as superintendent of schools until his retirement in 1923. Alderman also served as principal of the state school for the blind in Raleigh from January to August of 1918, after the death of J. E. Ray; he served on the school's board of directors for sixteen years. He conducted many teachers' institutes and wrote articles on educational subjects throughout his career.

Alderman was elected to the North Carolina Senate in 1925 and 1929.

One of the leading Baptist laymen in North Carolina, Alderman served at the Henderson First Baptist Church as, among many other things, deacon and Sunday school superintendent. He acted for the Tar River Baptist Association as moderator, 1922–23, 1928–30; as a member of the executive committee, 1922–26; and as historian, 1926–31.

In 1921 Alderman was appointed to the historical commission of the Baptist State Convention of North Carolina, the function of which was to encourage research and collect historical materials for the Baptist Historical Collection, Wake Forest College. Alderman was elected chairman on 13 June 1922 and continued to serve until his death. As chairman, he developed a biographical questionnaire sent to all North Carolina Baptist ministers in 1923–24. His card file of information on deceased Baptist ministers and his other notes were the basis for the biography file now in the E. T. Crittenden Collection in Baptist History, Z. Smith Reynolds Library, Wake Forest University. In 1923 Alderman began writing a history of the Sandy Creek Baptist Association, and in 1925 he and the other members of the historical commission were authorized to select an individual to write a history of North Carolina Baptists. Dr. George Washington Paschal of Wake Forest College was selected, and in 1930 his History of North Carolina Baptists, Volume I, 1663–1805 was released. As chairman of the historical commission, Alderman attended the two hundredth anniversary of Shiloh Baptist Church, Camden County, and in 1927 addressed the centennial meeting of the Eastern Baptist Association. 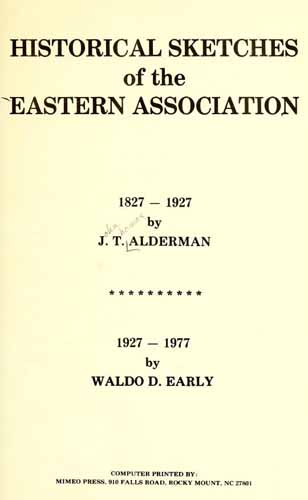 I have a paper written by

I have a paper written by John Thomas Alderman dated 1954. It is a story of Amariah Biggs Alderman 1819 - 1889. It tells for Amarih's experience in the Civil War. A great story. By law can I publish this story as long as I give credit to the writer./ Or who should I write tol get permission? Thanks

who is the publisher of the

who is the publisher of the book? If it's 1954, likely still under copyright.