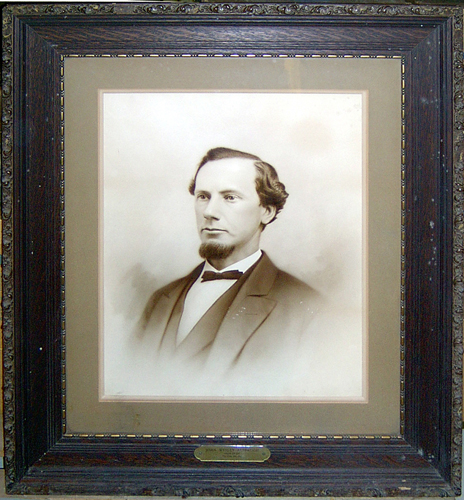 John Wesley Alspaugh, banker, editor, and lawyer, was born in Forsyth County, one of ten children of John and Elizabeth Lashmit Alspaugh. He was the grandson of Henry Alspaugh, who came from Germany about the time of the Revolutionary War and settled in the Moravian community of Salem. Alspaugh's father was minister for nearly fifty-six years of the Methodist Episcopal Church in Winston. Alspaugh spent his early years on the family farm and there received his only education prior to entering Trinity College in 1850. After graduation in 1855, Alspaugh moved to Greensboro to study law under Judge Robert Dick. Obtaining his license to practice law in 1857, Alspaugh opened an office in Winston. Because of financial need, he was forced to take a position with a newspaper, the weekly Western Sentinel. Within a year, Alspaugh had become coeditor and by 1859 was editor and proprietor. The newspaper staunchly supported the South and the Democratic party during this crucial period, favoring Breckinridge in the presidential campaign of 1860.

Following the siege of Fort Sumter, the Sentinel ardently favored North Carolina's joining the Confederacy and attacked the "John Brown Administration" in Washington. Alspaugh continued to support the Southern Democratic position through his newspaper until retiring as editor in 1872. In 1858, Alspaugh was elected chief clerk of the North Carolina Senate. He originally intended to serve only one term but was reelected and stayed in office until the end of the Civil War.

After retiring as editor of the Western Sentinel, Alspaugh devoted himself to the practice of law and to business and civic affairs. In 1876 he was one of the primary organizers of the First National Bank of Winston. He was cashier until 1892, when he became president.

From the 1870s until his death, Alspaugh had three main interests: the industrial and civic progress of Winston, the development of Trinity College, and the work of the Christian churches. He promoted the progress of Winston through his capacity as banker and businessman, by aiding in the development of manufactures and greater railroad facilities for his community. He was mayor of Winston from 1871 to 1876 and town commissioner from 1886 to 1893.

Alspaugh helped develop Trinity from a small and nearly bankrupt college in the 1870s and 1880s to a successful institution at the time of his death. He served as a trustee from 1869 until his death and was president of the board of trustees from 1880 until 1897. In 1884, when Trinity nearly closed its doors for lack of money, Alspaugh and two other men formed a committee of management, which completely controlled the college for two years. This service, along with liberal financial contributions and solicitation of contributions from others, enabled Trinity to survive.

To promote his third interest, Alspaugh, a member of Centenary Methodist Church and a deeply religious man, contributed a great deal of money for the building of churches in Winston.

Alspaugh was married in 1861 to Olivia Stedman, who died in 1869; he was married again in 1872, to Celeste Tucker. He had no children by his first wife and two daughters and one son by his second wife: Emma Celeste, John Wesley, Jr., and Violet G. He died after a stroke of paralysis and was interred at Mt. Tabor Methodist Church Cemetery.