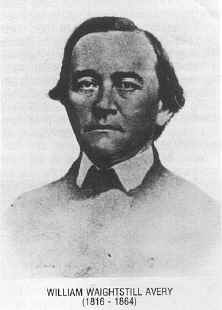 William Waightstill Avery, Confederate congressman and army officer, was born at Swan Ponds, his father's plantation in Burke County. He was the oldest son of Isaac Thomas Avery, planter, slaveholder, and cashier of the Morganton branch of the state bank, and of Harriet Eloise Erwin, the daughter of William Willoughby Erwin.

After growing up in Burke County, Avery entered The University of North Carolina in 1833. Although inadequate preparation forced him to study during vacations, he was graduated with highest honors and gave the valedictory address in 1837. He then studied law under Judge William Gaston, was licensed to practice in 1839, and entered politics in 1840 as an unsuccessful Democratic candidate for the state House of Commons. Two years later, however, he was elected and served one term as representative from Burke County. Between 1842 and 1850, Avery devoted himself to his law practice in Morganton, but in 1850 and 1852 he again represented Burke County in the House of Commons.

In the session of 1850 he supported a bill amending the state constitution to remove freehold qualifications for electors of the state senate. At the same time he opposed the calling of a special convention to approve this amendment, on the grounds that such a convention might proceed to attack the federal basis of representation, reopening animosity between eastern and western sections of the state and drawing undesirable attention to the whole question of the political representation of slaves. In the same session, when the legislature established a joint select committee on Negro slavery to consider resolves related to the Compromise of 1850, Avery reported to the House of Commons for the minority of the committee. The minority resolutions defined the Union as a compact among sovereign states and affirmed North Carolina's right to secede if the people, in a special convention, believed secession necessary to the protection of their rights. Although the legislature failed to adopt any of the proposed resolutions, Avery had clearly taken his place as a states' rights Democrat. 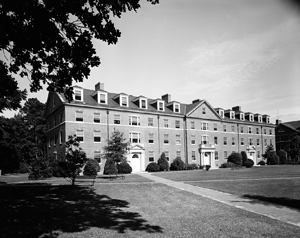 While defending slavery and southern rights and gradually moving toward active support for secession by 1860, Avery also became one of a group of leaders who, in the 1840s and 1850s, demanded progress for North Carolina. After his appointment as a trustee of the university in 1850, Avery delivered a commencement address to the two student societies in 1851 on the theme of state pride. Reminding his listeners of North Carolina's contributions to the American Revolution, he urged them to overcome the backwardness of recent decades by building ports and factories, improving the state's schools, producing a state literature, and ending emigration from the state. On a practical level, he took an active part in the organization of the Western North Carolina Railroad, of which he became a director in 1857.

In November 1851, as he left the courthouse at Marion, Avery was hit with a rock and then beaten with a cowhide by Samuel Fleming, a participant in a suit in which Avery was involved as legal counsel. Two weeks later, when Fleming walked into Judge William Horn Battle's courtroom in Morganton, Avery shot him through the heart. Tried for murder before Judge Battle, Avery was acquitted on the grounds of extreme provocation leading to temporary insanity, with the jury deliberating for only ten minutes.

In spite of some criticism, especially in the Whig press, of the laxity of the law in this case, the incident appears to have had little effect on Avery's political career. He was reelected to the House of Commons in 1852, led the delegation from North Carolina to the Democratic National Convention that nominated James Buchanan in 1856, and in the latter year was elected to the state senate, of which he was chosen speaker. In 1858 he ran for the congressional seat vacated when the legislature appointed Thomas L. Clingman to the U.S. Senate, but conflict between Avery and David Coleman, another Democrat, resulted in the election of the Whig candidate, Zebulon Baird Vance.

Again in 1860, Avery was chairman of the state's delegation to the Democratic National Convention in Charleston, S.C. As chairman of the committee on resolutions, he favored the majority report denying the right of Congress or territorial legislatures to prohibit slavery in the territories, demanding federal protection for all property in those territories, upholding the Fugitive Slave Act, and advocating the acquisition of Cuba from Spain as soon as practicable. The North Carolina delegation did not walk out when the convention adopted instead the committee's minority report, supporting popular sovereignty in the territories and the platform of 1856. In the subsequent convention in Baltimore, however, the denial of seats to those southerners who had walked out in Charleston led Avery and the majority of the North Carolina delegation to leave and, with other southerners, nominate John C. Breckinridge of Kentucky. Accused in North Carolina of Disunionism, Avery insisted in a debate in Charlotte that he was merely protecting southern rights and was no more a Disunionist than presidents Franklin Pierce and James Buchanan.

After Lincoln's election, however, Avery apparently decided that secession could no longer be avoided. He was reelected to the state senate in 1860 and, in December of that year, presented resolutions from a nonpartisan group of his Burke County constituents advocating the call for a secession convention in North Carolina. While the state's voters rejected such a convention in February 1861, despite the continuing efforts of Avery and other secessionists, Burke County supported it by a vote of 718 to 273.

After North Carolina finally seceded on 20 May 1861, Avery was chosen by the secession convention to represent the state in the provisional Confederate Congress, where he served as chairman of the committee on military affairs. Failing to win appointment to the Confederate Senate in 1861, he returned to Burke County with Jefferson Davis's authorization to raise a regiment for the Confederate Army; there, however, the protests of his father and the fact that his four younger brothers were already serving convinced him that family obligations demanded his presence at home. Nevertheless, he died in Morganton from wounds received when he and Colonel T. G. Walton led a company of Burke County militia against a party of Tennessee Unionists, who had marched into the state and captured several conscripts in training near Morganton. Avery was buried in the cemetery of the First Presbyterian Church in Morganton.

In May 1846, Avery married Mary Corinna Morehead, the daughter of John Motley Morehead, Whig governor of North Carolina from 1841 to 1845. They had two sons: John Morehead, who became a lawyer in Dallas, Tex.; and William Waightstill of Mitchell County. They also had three daughters: Annie Harriet, who married Joseph H. Scales of Patrick, Va.; Corinna Iredell, who married George P. Erwin of Morganton; and Adelaide Matilda, who married John J. Hemphill of South Carolina.

W. W. Avery, Address Delivered before the Two Literary Societies of the University (1851).

and Speech upon the Subject of Constitutional Reform (1850).