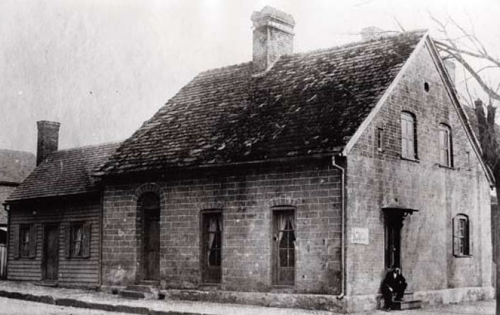 Traugott Bagge, Moravian leader, was born in Gothenburg, Sweden, the fourteenth and youngest child of merchant Lorenz Bagge and Anna Margaretha Calms. He was educated in the town schools and trained by his father in the trade of merchant. In 1775, Bagge joined the Unity of the Brethren (Moravians); he was called to service in England in 1759. There he met Rachel Nikelson, and they were married in 1767. A year later, Bagge and his wife answered a call to go to Wachovia and the Moravian settlement in North Carolina. They arrived in Bethabara on 14 Feb. 1768 and immediately became important members of the Wachovia community. Early in 1772, Bagge became the chairman of the first Aufseher Collegium and also took charge of the community store, first at Bethabara and later at Salem. During the following years, Bagge's duties and responsibilities increased: in addition to charge of all store books and accounts, supervision of all trade and commerce of the community, and travel as far away as Charleston, S.C., and Philadelphia, Pa., on store business, Bagge managed to hold several local civic offices and serve as a member of the North Carolina assembly.

Bagge was active in governmental affairs; in 1778 he presented to the assembly in Hillsborough a petition concerning the Moravian position during the Revolutionary War. Since bearing arms was against Moravian policy, Bagge was highly praised for his instrumental role in lowering the fines for abstention from military service. Bagge also presented to the assembly the brethren's petitions asking that Dobbs Parish remain undivided by county lines, protesting the Oath of Affirmation and Abjuration, and asking for protection from the Confiscation Act. In 1782, Bagge became a justice of the peace, was elected to the North Carolina assembly, and was appointed auditor for Surry County. 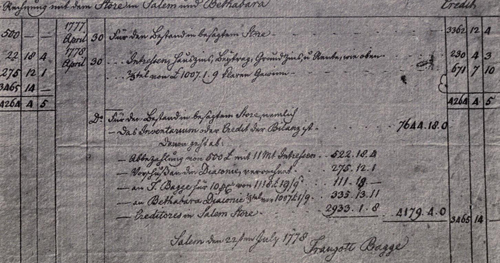 The onset of the Revolutionary War was a difficult time for the Moravians in America. Not only did they object to bearing arms, they owed a proprietary quitrent for the Wachovia tract and a debt of gratitude to the Crown: Religious exiles from several European countries, they had been aided and encouraged by the English government to settle in the American colonies. When the revolutionary factions required an oath of allegiance to the new state and a renunciation of all allegiance to England and her government, the Moravian colonists found a difficult choice. Although Bagge's petitions achieved little success, through his letters and papers he at least brought to public view the causes of the Moravians' uncertainty.

Despite his enthusiastic civic activity, Bagge was efficient in his own business. As manager of the Gemein or church-owned store, he maintained a balance in imports and exports and kept the books in order and the accounts financially sound. Although he was apparently a choleric individual at times (he was constantly at odds with his apprentices), his excellent business sense and training made the store a success. He operated the store until his death.

By 1793, Bagge was the leading layman in financial matters in Wachovia. His mercantile policies resulted in a vast trading network including the whole eastern part of the country from New England to Georgia, as well as trade with several European countries. During the Revolution he acted as an important supplier for the Continental forces.

Bagge translated many Moravian papers from German into English, including the "History of the Brethren." He also wrote an unpublished narrative history describing the American Moravians' tribulations during the Revolution.

Bagge married only once and had four children: Anna Elisabeth, Maria Rachel, Benjamin Samuel, and Charles Frederick. Charles alone outlived his father; he helped operate the store temporarily after his father's death. Bagge died in Salem; his death was felt keenly in Wachovia and around the state and country.

The Magazine of History with Notes and Queries, Volume 4: http://books.google.com/books?id=Y83e9VBfEwwC&pg=PA266&lpg=PA266&dq=Traugott+Bagge&source=bl&ots=2TF-qt9S1h&sig=E13gfGbYXRXrZzePMaN5XJ_9vHE&hl=en&sa=X&ei=NuwcUbDSHYfo9ATxxYHQBg&ved=0CIABEOgBMAk#v=onepage&q=Traugott%20Bagge&f=false