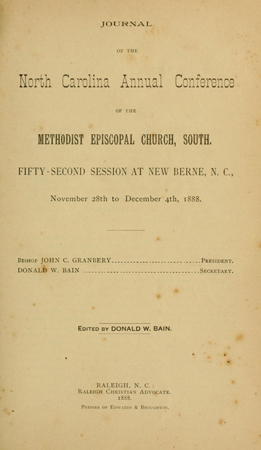 Donald William Bain, state treasurer, was one of five children born to William T. Bain and Martha A. Hill of Raleigh. He was a descendant of mid-eighteenth century Scotch-Irish immigrants who settled in the Wilmington area, and he was linked with the Huguenots through his paternal grandmother, Frances Hall. His father was a prominent Mason, serving as secretary of the Grand Lodge of North Carolina all but four years between 1836 and his death in 1867.

Bain received his education at South Lowell and Pittsboro high schools and at Lovejoy Academy. At age sixteen he embarked upon what proved to be two of three lifelong careers. In search of a profession, he obtained a position as the youngest clerk in the state comptroller's office, beginning thirty-five years of service in the state financial organization. The same year, he was welcomed into membership in the Edenton Street Methodist Church in Raleigh, where he had attended since boyhood and participated actively throughout his life. He inaugurated his third career in 1867, succeeding his father as grand secretary of the North Carolina Masons.

Bain cultivated industrious work habits and a love for finance in the comptroller's office throughout the Civil War years, and, in July 1865, he accepted an appointment as chief clerk of the North Carolina Treasury Department. He held the post just seven months less than twenty years. One of the pressing issues confronting the state during Bain's head clerkship was the settlement of an attempted repudiation of the state debt in the 1870s. In the last year of the decade, he served as a commissioner for the adjustment and renewal of special tax railroad bonds as part of the final settlement. Five years later, following the resignation of the incumbent, the Democratic party presented Bain to the electorate as their candidate for treasurer, and he won a four-year term. In 1888 and again in 1892, the party renominated him by acclamation. He served North Carolina as a hard-working, conscientious steward of finances until his death from heart disease nine days after his third electoral victory. In the course of his public service, he earned a reputation for devotion to duty, comprehensive knowledge of the financial system, sincerity, and upstanding Christian character.

His church and Masonic careers were almost as important to him as his political career. He held numerous positions in the Edenton Street Church and wrote a pamphlet history of it in 1881. Beyond his local involvement, however, he was active and influential in both the state and national Methodist Episcopal organizations. Yearly, the Raleigh district chose him to represent it at the North Carolina Annual Conference of the Methodist Episcopal Church, South, and in 1883 he became the first layman ever elected secretary of the conference. He held the post until 1892. Twice he represented the state church at national conferences: in Richmond in 1886 and in St. Louis four years later. In the Masonic Lodge he was secretary of the Grand Royal Arch chapter, recorder of the Grand Council, grand commander of the Knights Templar for North Carolina from 1885 to 1887, and, for twenty-five years, grand secretary of the North Carolina Masons. As a member of the Scottish Rite, he held thirty-two of a possible thirty-three degrees.

On 26 Jan. 1865, Bain married Adelaide V. Hill, the daughter of a Raleigh physician. Of their four children, only William H., Ernest B., and Adelaide V. survived Donald. Throughout the summer of 1892, Bain was unwell. By fall, he knew he had an incurable heart disorder, but he stood for reelection anyway. He died in Raleigh at the age of fifty-two and was buried there.

The beginnings of freemasonry in North Carolina and Tennessee,  by Marshall De Lancey Haywood. in GoogleBooks.

Donald W. Bain was my GG

Donald W. Bain was my GG Uncle. He is buried in Oakwood Cemetery Raleigh NC in a family plot

How are you. Just looking up

How are you. Just looking up Confederatre fractional currency notes I have. I have a North Carolina 1964 note signed by D.W Bain, when all records state Dodd is the accepted signature? I know he worked in the office during that time though. Any insight would be appreciated.