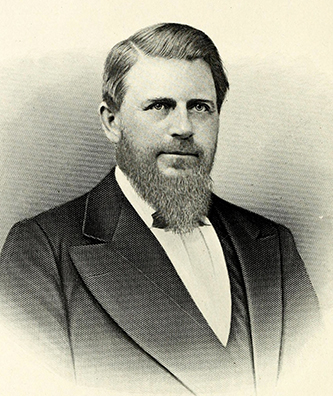 Joseph Henry Baker, physician and surgeon, was born in Edgecombe County. His father was William S. Baker, a physician and farmer who had been a county representative in 1838 and 1840. His grandfather was Moses Baker, owner of an extensive plantation employing many slaves. Moses represented the county in the House of Commons several times between 1819 and 1829. Moses Baker's father was Jonathan Baker, a native of England who first settled in Nansemond or adjacent Isle of Wight County, Va. It is possible that the Bakers of England were among the gentry, because there is evidence of an old Virginia deed stamped with a wax seal bearing a coat of arms. Joseph H. Baker's mother was Julia Shirley or Shurley, daughter of Henry and Elizabeth Davis Shurley.

Baker attended schools in Tarboro and entered The University of North Carolina in 1850, but after two years he transferred to the University of Pennsylvania. He obtained his M.D. degree in 1854 and entered into a practice with Dr. J. Lawrence, an elderly physician. In April 1861 he joined the Edgecombe Guards, afterward Company A, First North Carolina Regiment of Volunteers. While stationed at Yorktown, Va., he was surgeon in charge of the regiment, which disbanded in November of that year. He then returned to Tarboro and, in time, built up a substantial practice. Baker was president of the county board of health, twice vice-president of the Medical Society of North Carolina, and a member of the Edgecombe Medical Association. At a meeting of the latter in 1880, Baker was a committee member entrusted to convey a petition to the state medical society, requesting (1) that legal steps be taken to protect physicians and patients from "ignorant and incompetent druggists," by having druggists licensed through the state board of medical examiners, and (2) that, in an age when the family doctor spent hours in his horse and buggy, despite "the proverbial unwillingness of a large portion of our patients to pay the physician, even when able," a statutory lien be made legal for recovery of medical claims.

Baker was several times an alderman of Tarboro and twice its mayor. As a Democrat, he was elected to the state legislature in 1866–67, and in 1868 he was a delegate, with Henry C. Cherry, an African American, to attend the convention under the Reconstruction Act to form a new state constitution. He was a member of the Odd Fellows and in 1870 was elected grand master of Grand Lodge. He was a member of the American Legion of Honor and also a director of various banking, building and loan, and agriculture associations. His first wife was Susan A. Foxhall of Edgecombe County. They had four sons, Frank S., Thomas A., Joseph H., Jr., and Julian M. His second wife was Ida Manly, daughter of Governor Charles Manly of Raleigh. To them were born a son and a daughter. Baker was a member of the Protestant Episcopal Church of Tarboro and was buried in the cemetery of Calvary Church.

Transactions of the Medical Society (1902).

Makers of America: Biographies of Leading Men of Thought and Action, the Men who Constitute the Bone and Sinew of American Prosperity and Life, Volume 2 (Google eBook).