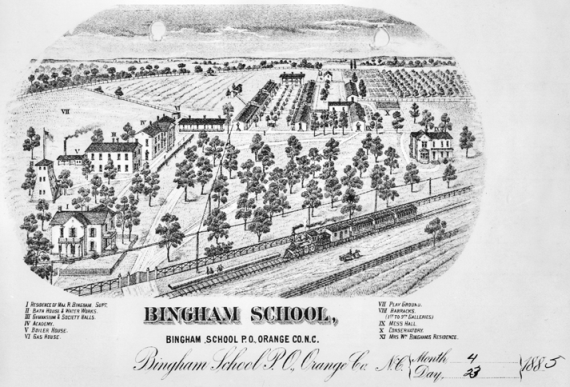 William Bingham, schoolmaster and professor at The University of North Carolina, was born in Kilmore Parish, County Down, Ireland, of a Protestant family that is reported to have emigrated from northern England in the seventeenth century.

Virtually nothing certain is known of Bingham's parents nor of his life prior to his arrival in Wilmington. According to his grandson, Robert Bingham, he entered the University of Glasgow in 1774 and "graduated with the highest distinction"; however, his name does not appear in the official Roll of the Graduates of the University of Glasgow, 1727–1897. After graduation, he was reportedly licensed to preach by the Presbytery of Glasgow and became a Presbyterian pastor in County Down. Robert Bingham states that his grandfather left Ireland to avoid arrest because of his membership in the United Irishmen, a Protestant organization dedicated to Irish independence. He also indicates that Bingham arrived in Wilmington early in 1789. Standard sources, however, date the United Irishmen's founding as 1791, so it appears that Bingham must have emigrated at a later date, or for other reasons. Once in Wilmington, he seems to have used Masonic connections to gain positions as a private tutor and, later, as headmaster of a local academy.

By 1794, Bingham had moved to Pittsboro, apparently for his health, and from this point onward his career is well documented. On 2 Jan. 1795 (not 1793, as Bingham family sources traditionally relate), he opened Chatham Academy, a private boarding school that quickly gained a wide reputation. By 22 June 1795, the North Carolina Journal listed it as one of four schools preparing students for admission to the upper classes at The University of North Carolina.

Bingham contributed twenty dollars to a state-wide subscription fund in the early 1790s to finance the opening of the university. In 1801 he left Pittsboro to accept appointment as the university's professor of ancient languages, succeeding Archibald Debow Murphy. He remained there for four years, serving briefly as presiding professor, but resigned in 1805, partly because of dissatisfaction with the quality of the students and partly (according to contemporary rumor) because of the trustees' objections to his extreme Jeffersonian political opinions.

After leaving Chapel Hill, Bingham returned to Pittsboro and reopened his school. In 1808 he moved it to Hillsborough, where it remained, as Hillsborough Academy, until 1818. That year, desiring to raise his sons in a rural setting, he again relocated his school, in a log cabin on a farm he owned in the Mount Repose community, eleven miles northwest of Hillsborough. There he continued to teach until his death. A highly regarded teacher, Bingham founded a line of schoolmasters who remained influential in North Carolina for three generations. He was also among the first educators in the state to recognize the importance of women's education; in 1797, while still in Pittsboro, he erected a separate building for female students adjacent to his original academy and retained a woman assistant to aid in their instruction.

Bingham married Annie Jean Slingsby, the daughter of an officer in Cornwallis's army who had settled in the Cape Fear region. Two sons survived to adulthood: William James (6 Apr. 1802–19 Feb. 1866), who succeeded his father as headmaster at Mount Repose; and John Archibald, a Presbyterian preacher and tutor.

History of the University of North Carolina. Volume I: From its Beginning to the Death of President Swain, 1789-1868:
Electronic Edition. Battle, Kemp P. (Kemp Plummer), 1831-1919: https://docsouth.unc.edu/nc/battle1/battle1.html

"The Bingham School-Its Past, Its Present, Its Future." Biennial Report of the Superintendent of Public Instruction of North Carolina part 2. Raleigh: Guy V. Turner. 1898. 146-170. https://www.worldcat.org/title/biennial-report-of-the-superintendent-of-public-instruction-of-north-carolina-for-the-scholastic-years-1896-97-and-1897-98/oclc/12588559&referer=brief_results (accessed May 16, 2013).

William Bingham's schools would eventually become the Bingham School under the leadership of his son. The buildings and grounds of Bingham School at Mebane as depicted in an engraving on the school's letterhead, 1885. North Carolina Collection, University of North Carolina at Chapel Hill Library.