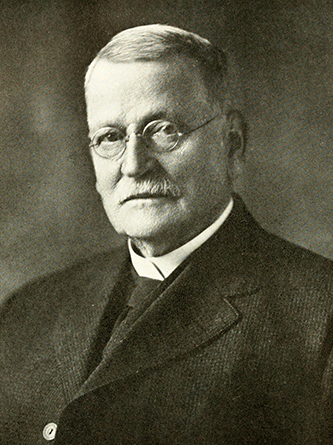 Robert Bingham, headmaster of Bingham School and educational advocate, was born in Hillsborough, the fourth child of William James Bingham, then principal of Hillsborough Academy, and his wife, Elizabeth Alves Norwood. After studying at his father's school (1849–53), which by then had been moved to Oaks, he entered The University of North Carolina and was graduated in 1857, one of the four first honor men in his class.

In July 1857, Bingham was admitted as junior partner in his father's school, which assumed the firm name W. J. Bingham and Sons. With his brother William, also a partner, he briefly toured Virginia to observe educational procedure at the University of Virginia and the more prominent secondary schools and then returned to Oaks to teach with the rest of the family. He received the M.A. degree from The University of North Carolina in 1860.

The Binghams were all firm Whigs who initially opposed secession. Nevertheless, Robert, who belonged to a company of Orange County militia, enlisted in state service with his compatriots on 8 Mar. 1862; on 25 Mar. he was elected captain of Company G, Forty-fourth North Carolina Infantry. On 26 June 1863 he was captured in the action at South Anna Bridge. He was interned at Johnson's Island and Fort Delaware until 27 Apr. 1864, when he was exchanged at Point Lookout, Md. He then rejoined his regiment and fought until the surrender at Appomattox Court House, 9 Apr. 1865, when he was paroled as a captain. Through most of his life, however, he was called by the honorific "Major"; later he was commissioned a colonel in the North Carolina National Guard.

After the war, Bingham resumed his post as instructor at the school, which had relocated in Mebane in 1864. On the death of his father in 1866, he became coprincipal with his brother, William. On William's death in 1873, he became headmaster and (after buying out the interest held by his cousin, William B. Lynch, in May 1879) sole proprietor. Under his administration, the Bingham School maintained and enhanced its nation-wide reputation. Enrollment gradually expanded to three hundred students. The military curriculum was reformed, and after 1882 commissioned officers were detached from the U.S. Army to serve as professors of military science and tactics. When Bingham moved the school to "Bingham Heights" near the French Broad River at Asheville in 1891, its facilities included the first gymnasium and swimming pool ever built specifically for secondary instruction in the South.

Bingham's most lasting influence lay in public education. Almost alone among private educators, he was convinced of the value of a public school system and lent it considerable support. As early as 1870 he was advocating free public schools for blacks, although he continued to believe in school segregation for the rest of his life. From 1877 to 1881 he lectured at the summer teachers' institutes at The University of North Carolina, and throughout the 1870s he delivered speeches at Wilmington, Raleigh, Goldsboro, and Charlotte as part of local campaigns to adopt county-option school tax referendums. On 15 Feb. 1884 he addressed the Superintendents' Department of the National Education Association, meeting in Washington, D.C., urging passage of the Blair Education Bill, which would have provided for an allocation from the federal surplus for the relief of impoverished southern school systems. So great was this speech's success that he was asked to repeat it at the NEA's general convention at Madison, Wisc., on 16 July that same year; reprinted in pamphlet form as Educational Needs and Status of the New South, it was widely distributed throughout the South and the nation. The campaign for passage of the Blair bill (and, in large part, Bingham's speech) helped to draw attention to the state of southern public education and generated further, more successful improvement campaigns.

On 2 Feb. 1873, Robert Bingham and his brother William were among a delegation of fifty-five dignitaries who met with the state senate in Raleigh to plead for a reopening of the university. On 9 July that same year, Bingham delivered a highly regarded speech on the same subject to a meeting of the state education association in Raleigh. On 11 Nov. 1885 he was principal speaker at a mass meeting in Raleigh, organized by the Watauga Club, supporting the establishment of a state agricultural and mechanical college. Although originally opposed to women's education as a waste of funds, a tour of the Massachusetts school system, which in the elementary grades was staffed overwhelmingly by female teachers, converted him. At a meeting of the Black Mountain conference of the North Carolina Teachers' Assembly in 1884, he publicly advocated the recruitment of women as an answer to the state's teacher shortage. At the Black Mountain conference of 1886, he proposed a state institution for training women teachers. Contemporaries regarded these speeches as largely responsible for the organization of the state teachers' institutes, conducted once a year in every county of the state by Charles D. McIver and Edwin A. Alderman (1889–91), and, ultimately, for the establishment in 1891 of the State Normal and Industrial School for Women at Greensboro.

An active Mason, Bingham was senior grand warden of the Grand Lodge of North Carolina for 1880 and 1881 and grand master for 1882, 1883, and 1884. While in office, he was instrumental in reforming the administration of the Masonic Orphanage at Oxford, instituting supervision by a board of directors. A speech he delivered as grand master to a convention of the Grand Lodge in Raleigh, 13 Jan. 1885, led directly to a five thousand dollar appropriation by the General Assembly to establish an industrial training program at the orphanage, one of the first such programs in the South. An early believer in compulsory education, he was able, while a resident in Asheville, to steer a local-option compulsory attendance bill for the city through the legislature and then achieve its adoption through referendum by careful manipulation of the city's labor vote. This law, one of the first adopted in the South, was the forerunner of much later legislation.

A prolific writer and popular speaker, Bingham gained a wide audience through his articles on southern affairs. His writings included "An Ex -Slaveholder's View of the Race Question in the South," Harper's Review (international edition, July 1900) and "The Misunderstandings between the Sections of Our Common Country," North American Review (September 1904). A summary of Bingham's views on secession may be found in his 13 Oct. 1908 presidential address to the North Carolina Literary and Historical Association: "Secession in Theory, as the Framers of the Constitution Viewed It; Secession, as Practiced and as Sustained by the United States; Secession, as Attempted by the Confederate States."

Bingham, a Presbyterian elder and a life member of the National Education Association, also served as a director of the American National Bank and Wachovia Bank and Trust Company. In 1891, The University of North Carolina awarded him an honorary LL.D.; in 1929, Bingham Hall on the University campus was named in his honor; and on 12 Oct. 1939, a memorial tablet in his name was installed in the university's Memorial Hall.

An attack of influenza complicated by pneumonia finally forced Bingham to retire from the Bingham School in 1920. Since 1904 he had entrusted the future of the school to a board of trustees, but when he died in Asheville in 1927, it did not long survive him. In the autumn of 1928, the school closed, supposedly to carry out major new construction; it never reopened.

Southern Historical Collection, Record Group 3731 (University of North Carolina, Chapel Hill) for some of Bingham's correspondence and records relating to his management of the school.

Bingham, Robert. Secession in theory, as the framers of the Constitution viewed it ; secession as practiced and as sustained by the United States ; secession as attempted by the Confederate States. [Raleigh?, N.C. : North Carolina Literary and Historical Association?]. 1908. https://archive.org/details/secessionintheor00bing (accessed May 17, 2013).

"The Bingham School-Its Past, Its Present, Its Future." Biennial Report of the Superintendent of Public Instruction of North Carolina part 2. Raleigh: Guy V. Turner. 1898. 146-170. http://books.google.com/books?id=9AnNAAAAMAAJ&pg=PA928#v=onepage&q&f=false (accessed May 17, 2013).