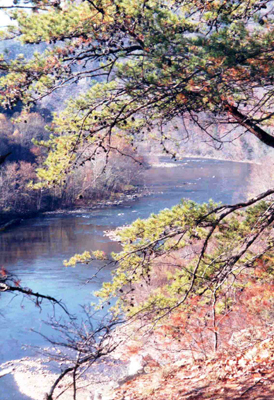 French Broad River is formed by the junction of North Fork and West Fork in southern Transylvania County near the town of Rosman. It flows northeast into Henderson County, where it turns northwest and courses through Buncombe and Madison Counties. The French Broad flows through the city of Asheville, where it picks up the Swannanoa River and continues north into Tennessee. After leaving North Carolina, the French Broad proceeds west for 102 miles, joins the Holston River to form the Tennessee River near the city of Knoxville, and eventually flows into the Mississippi River.

The Cherokee names for the French Broad River vary, but the most common was Tah-kee-os-tee, meaning ‘‘racing waters.’’ Others, such as Peo-li-co, Agiqua, and Zillicoah, usually referred to only a part of the river. The English originally knew it as the Broad River—the way it was written on a 1766 map of Indian Nations. By 1776, however, the word ‘‘French’’ had been added because much of the territory west of the Blue Ridge, where the river drained, was occupied by the French in the 1700s.

The French Broad River has a North Carolina watershed of 2,830 square miles; its total length in North Carolina is about 70 miles. For much of the twentieth century the river was environmentally threatened, but through several public and private initiatives it has recovered and become an important natural and recreational area. The river basin encompasses 24 municipalities that had a total population of about 400,000 people in the early 2000s. One of two rivers in theUnited States that flows north, the French Broad is also one of the world’s oldest rivers, predated, by some estimations, only by the Nile and New Rivers (the New River is also in the North Carolina mountains).

Bland Simpson, "The French Broad: On the Road to Wellville," Wildlife in North Carolina 63 (November 1999).