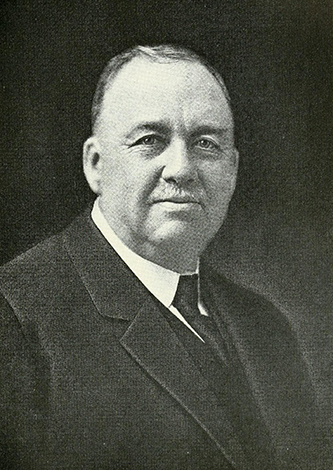 James Bishop Blades, lumberman, industrialist, and financier, of English ancestry, was born at Bishopville, Md., the second son of Captain Peter Clowes Blades and Nancy Emeline West and a grandson of Greensbury Blades and William C. West, both of whom were successful farmers.

At the age of thirteen, left orphaned, he was sent to the home of an uncle, Ezekiel Williams Blades, in Barry, Pike County, Ill. After a few months he went back to his native town and began clerking in the country store of another uncle, James W. Evans. He attended public schools at Bishopville and Snow Hill, Md., and was graduated from Eastman Business College, Poughkeepsie, N.Y. For a year he taught school at Bishopville.

For several months in 1875 he and his older brother, William Benjamin, operated a mercantile establishment at Greenback, Va. Returning to Bishopville, they formed a merchandising partnership with their uncle under the name Evans & Blades. In 1877 they bought water-powered grist- and sawmills there.

This first milling venture was supplemented by purchases of timber tracts. After his attention was attracted to the virgin forests of the south, J. B. Blades in 1879 traveled on foot, muleback, and railroads through Florida and other southern states. Prospects appeared so bright that he and his brother decided to transfer their operations southward. Florida was considered too far from northern markets, so in 1883 they leased a mill site and bought timberlands near Bath. The elder brother had charge of the sawmills and timber acquisitions, and the younger looked after the sales of the products. Realizing the importance of having a manufacturing plant near their mills, they selected Elizabeth City as their headquarters and moved there from Maryland in about 1888. Joining them were two younger brothers, Dr. L. S. and Carl. G.

Previously, in 1886, the brothers had extended their transactions to Craven County, where timber and labor were plentiful and water transportation was convenient. In that year they leased a mill site on Trent River opposite the town of New Bern, and later they acquired much other real estate eastward. For them was established a post office, discontinued in 1935, which was named "Cherry Point," from the cherry trees growing on the "Point" on the south side of Neuse River east of Hancock Creek, now a part of the U.S. Marine Corps air station.

After traveling alone around the world in 1903, Blades decided to make his home at New Bern. There he and his oldest brother looked after their diversified local interests, while his son, Levin Carl, assumed management of the planning and sales divisions at Elizabeth City.

Surviving the 1893 panic, their business proved highly profitable. For twenty-four years in East Carolina they did much to start and develop modern methods of cutting trees and selling the output of their mills. Dry kilns were introduced, and marketing was expanded. Instead of selling logs outside the state, as other mill men were doing, they confined their operations entirely within North Carolina and thus substantially aided its economy. Most of their holdings, except the Elizabeth City branches, were sold in 1906 to the John L. Roper Lumber Company, owned and operated by the Norfolk and Southern Railroad Company. Although Blades objected, he finally consented to the sale when his brothers insisted that they wanted to retire from business. 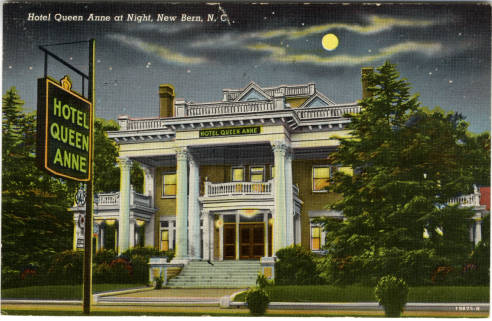 At New Bern, Blades built on Broad Street a fine, new home with elaborate, carved mahogany interior woodwork. After being converted in 1939 to the Queen Anne Hotel and later razed, it became the site of the primary local branch of the First-Citizens Bank and Trust Company.

During the summer of 1918, Blades went to Western Carolina for a vacation visit. While he was en route alone from Black Mountain toward Statesville, his car failed to make a curve near Marion, and he was killed in the accident. The funeral was at the Centenary Methodist Church, of which he had long been a devout member. The body was taken for interment to the Odd Fellows cemetery at Bishopville, Md., where his parents were buried.

On 4 Feb. 1880, in Maryland, he had married Margaret Ann Warren of Whaleyville, Md., daughter of Joseph E. Warren and Milbourn Dale. To them were born five children, two of whom survived him: L. C. and James Vernon. After his wife's death, he was married on 4 Jan. 1904, at Clayton, to Pearl Tessie Robertson, daughter of Dr. James Battle Robertson and Julia Ann Ellington of Clayton. She also survived him.

Family records and genealogies in the possession of descendants.

I bought a sepia picture of a

I bought a sepia picture of a beautiful, huge home under construction at an estate sale in the late '70s in Greensboro, NC. There are eighteen workers posing, five men in business suits and a distinguished looking gentleman in the back of a car. The picture is signed by Bayard Wooten and has New Bern, NC below the name. Several years ago while on vacation in Emerald Isle, my wife and I drove to New Bern to see if we could locate the house. We found a historical marker with information about Bayard Wooten but could not find the house. We finally located a gentleman who we were told knew the history of New Bern very well. He told us it was originally the home of James Blades and after his death was converted into the Queen Anne Hotel. He said that it was razed in 1967, which made us sad. After reading this article and after seeing his picture, there is no doubt that the distinguished gentleman in the top hat in the back of that car looking very proud is James Blades. After doing some research, I think the picture was taken in 1912, the same year the Titanic went down. My wife and I have since moved to Morehead City and have the picture hanging in our living room. We have really enjoyed seeing this frozen moment in time.

This is my great great

This is my great great grandfather! My great grandmother(Virginia) passed away in 2015 and she always loved telling stories of the house in New Bern. We still have the Steinway & Sons grand piano that was a wedding gift from J.B. to his wife, Pearl. I enjoyed learning more history about J.B.; thanks for writing this article!

My mother was a waitress

My mother was a waitress there back in the 50's or maybe 60's, but I remember going there for Sunday lunch when I was a young girl. Also my brother was a bell boy there.