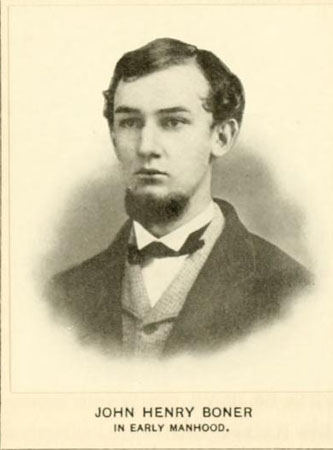 John Henry Boner, a southern poet whose technique and themes are suggestive of the poetry of Edgar Allan Poe, was born in Salem during the same year in which Poe achieved international fame with the publication of "The Raven." He was the youngest of the three sons of Thomas Boner and his wife, Phoebe Nading. The family home on Salt Street was restored by Old Salem, Inc., in 1952 and is open to visitors. Baptized in infancy and confirmed in the Moravian church during his youth, Boner was educated in the Salem Boys' School. As a tall lad, with expressive gray eyes, he developed a predilection for reading and for dreaming. He became a leader in the Salem Literary Society and, socially, was especially popular with the girls at the Salem Female Academy. His love lyrics were frequently suggestive of Poe's poems of unrequited love, ending with the death of a beautiful girl during the flower of her youth. Walking along the Yadkin River, he would notice the flush upon his companion's cheek (the fatal sign of consumption), reflected by the roses surrounding the lovers. Although a romantic throughout his lifetime, he extended his themes beyond those of love to include reflections on the vicissitudes of "mirth and tears" in life, patriotism for the South (in particular, North Carolina and Salem), and the victory of immortality over death.

At thirteen, Boner completed his formal schooling and became an apprentice to L. V. and E. T. Blum, Printers, where he received training that was of value to him in his later literary endeavors. When the Blums' newspaper, the People's Press, failed, Boner established the Salem Observer, which survived for a year. A Republican in politics, he availed himself of every opportunity to advance his political opinions in both newspapers. He was later associated with the Asheville Pioneer as an editor. Leaving Salem—" A little town with grassy ways/And shady streets, where life hung low"—he went to Raleigh, where he served in 1868 as a reading clerk of the North Carolina Constitutional Convention and, in 1869–70, as the chief clerk of the house of representatives. During his last year of service with the state government, he married Charlotte A. ("Lottie") Smith 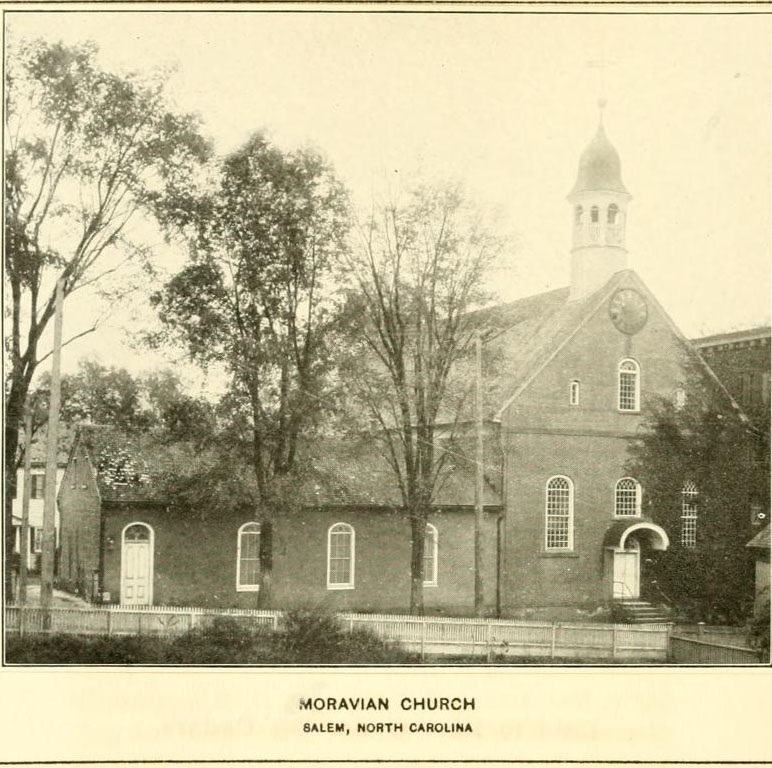 He and his wife then left for Washington, D.C., where, as an adherent of the Republican party, he was awarded a position in the Government Printing Office. In 1878 he became the president of the Columbia Typographical Union. With the return of the Democratic party to power during the Cleveland administration, he was discharged from the Washington appointment, which he had held for sixteen years, because of "offensive partisanship."

About the time of this reversal in his fortunes, Boner published his first volume of poems, Whispering Pines (1883). Recognizing Boner's genius, the poet and critic Edmund C. Stedman, upon hearing of his dismissal, invited him and his wife to come to New York. Through Stedman's influence, he found employment on the editorial staff of the Century Dictionary, and later he assisted Stedman with his Library of American Literature. Boner's career in New York also included such responsible assignments as literary editor of the World, member of the editorial staff of the Standard Dictionary, and editor of the Literary Digest. In a manner typical of Poe, Boner rashly resigned from the editorship of the Literary Digest following a policy dispute with the publishers.

In 1893, Boner moved to a small house, Cricket Lodge, which he had built on Staten Island. It was here that he wrote one of his widely known poems, "Poe's Cottage at Fordham," and advocated the establishment of a Poe Association to preserve Poe's cottage. Boner's health and fortunes declined during his residence at Staten Island, as had Poe's at Fordham. By 1900, through the efforts of his friends in Washington as well as his associates in the Authors Club in New York, Boner was restored to his former position in the Government Printing Office. His fragile constitution compelled him to relinquish his duties, however; and after raising funds for the publication of a small booklet entitled Some New Poems, he went

Back to the Old North State,
Back to the place of his birth,
Back through the pines' colonnaded gate
To the dearest spot on earth.

When he viewed the dilapidated condition of his boyhood home, he was inspired to write the lines of his famous poem "Broken and Desolate,"

There are some scenes that we should not
Revisit, though most dear they be—
Some things we nevermore should see—
Some places that should be forgot.

His health partially restored, Boner returned to his duties in the Government Printing Office during January 1903. But paralysis in his writing hand, bronchitis, and tuberculosis had come to stalk him. Fortified in spirit with the Moravian belief in a glorious resurrection and with his personal conviction that "there is a hope of heaven in every human breast," he anticipated without regret his death, which occurred in Washington. He was buried in the Congressional Cemetery. In one of his early poems he had expressed the desire to lie in peace in his native Salem. To carry out the poet's wish, his friend Marcus Benjamin formed the Boner Memorial Association, and sufficient funds were raised so that his body could be reinterred.

On Sunday, 11 Dec. 1904, in Salem's Home Moravian Church, Bishop Edward Rondthaler officiated at the memorial service, which was attended by a large congregation and distinguished by the presence of Governor Robert B. Glenn. Among the many dignitaries was Marcus Benjamin, editor of the National Museum, who delivered a tribute. William A. Blair read from Boner's poetry.

Soon after his death, the finest of Boner's writings were collected and published in Boner's Lyrics (1903). Complimentary copies were sent to the contributors of the Boner Memorial Association, and the remainder of the edition was sold for the benefit of the poet's widow, who spent her last days in Salem.