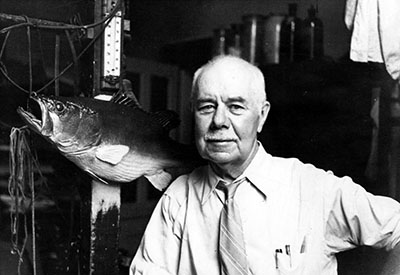 Herbert Hutchinson Brimley, zoologist and director of the North Carolina State Museum, was born in Willington, Bedfordshire, England, the son of Joseph and Harriet Brimley, who immigrated with their family to Raleigh in December 1880. Brimley received his formal education at the Bedford County School in Elstow, England, where he excelled in mathematics and sports.

Following unsuccessful attempts at farming and teaching, he and his brother Clement opened a taxidermy and biological supply company in Raleigh, where they quickly gained an international reputation as the leading naturalists of their day in the South. In 1884 the North Carolina Department of Agriculture commissioned Brimley to prepare a display of waterfowl and fishes for the State Centennial Exposition, and in 1892–93 he supervised the North Carolina zoological exhibition at the Chicago World's Fair. In 1893 the Department of Agriculture designated two rooms in its office building as the North Carolina State Museum, for the permanent display of the exhibits assembled by Brimley. On 15 Apr. 1895, Brimley was appointed curator of the museum, a post he held until 1928, when his title was changed to director. He served as director until 30 June 1937, when he became curator of zoology for the museum, a position he retained until his death. During the fifty years of his leadership, the institution grew into one of the best-known state museums in the United States, containing an outstanding collection of animal, plant, and geological specimens from the southeastern United States.

Brimley was married twice, first in December 1895 to Edith Jane Taylor, who died in January 1911, and then to Bettie Moore Love in February 1913. He had two sons, Robert E. and Arthur H. He was an active member of Christ Episcopal Church in Raleigh. Copies of numerous portraits are found in E. P. Odum's edition of Brimley's writings.

Biographies of Members of the American Ornithologists' Union (1954).