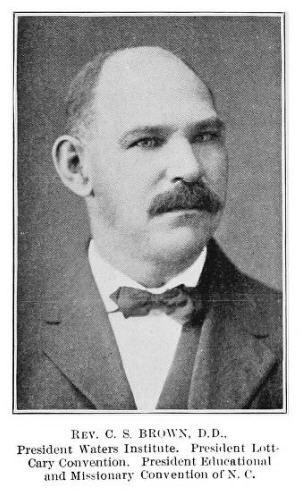 Calvin Scott Brown, educator, editor, minister, and advisor, was born in Salisbury of black and Scotch-Irish ancestry. His father was Henry Brown, a farmer, and his mother was Flora Brown. Brought up in poverty, he was educated at Freedman's Aid Society School, Salisbury, and Shaw University, Raleigh, where he earned A.B., A.M., and D.D. degrees. He worked his way through Shaw University with the aid of a northern white church. In 1885, at the insistence of Dr. H. M. Tupper, president of Shaw University, he went to Hertford County to assume the pastorate of Pleasant Plains Baptist Church. In that same year he founded the all-black Chowan Academy, which later became Waters Training School and then the Calvin S. Brown School in Winton. He remained principal of the school until his death in 1936. For approximately fifty years he served alternately as secretary and president of the Baptist State Convention (African American). For many years he served as moderator of the West Roanoke Association, and from its organization to his death he was president of the Lott Carey Foreign Mission Convention. For a number of years he was editor of the Chowan Pilot and the Baptist Quarterly , published in Raleigh. He was grand master of the Odd Fellows for a number of years, grand secretary of the Grand Masonic Lodge of North Carolina for about thirty years, and for several years grand master of that lodge. He was moderately active in Democratic affairs in Winton.

Brown, who traveled extensively in this country and in Europe and Africa, was offered a number of high and coveted positions; he chose, instead, to remain with the rural people of Hertford County, where he devoted his life's work and influence to the advancement of African American educational and spiritual life. He was a talented, self-taught musician who played the organ and piano and blew the cornet in a local band he organized. He served a three-year term on the Hertford County Board of Education and was appointed to the Liberty Bonds campaign during World War I.

To Chowan Academy, Brown gave his personal attention and supervision for fifty-two years as principal. His wife shared her family wealth and her personal interest in the building and operation of the school. In the school's early years, Brown journeyed north each year to secure operating funds from sympathetic white and black friends. Both Brown and his wife taught at the school for a number of years without compensation, and when he was afforded a salary, he would often return the entire amount to the operation and maintenance of the school. Through support obtained from his northern friends, the Baptist Home Mission Society, and the Chowan Sunday School Convention, he was able to enlarge his academy with additional buildings in 1893, 1909, and 1926. The 1926 building, known as Brown Hall, was a brick structure with six classrooms, principal's office, library, stage, dressing rooms, and auditorium. In 1924 the school facility was taken over by the State of North Carolina, which ensured its survival. Brown's activities were not entirely confined to the principalship of the school: his example offered a model of character building to blacks throughout the northeastern section of North Carolina.

Brown was married on 8 Dec. 1886 to Amaza Janet Drummond of Lexington, Va.; they had nine children. He died in Winton, and he and his wife were buried on the grounds of C. S. Brown School there. There is a portrait of Brown in Winton.

E. Franklin Frazier, The Negro Family in the United States (1939).

National Cyclopedia of the Colored Race (1919).