Charlotte Hawkins Brown, a pioneer in education and race relations, was born on a farm near Henderson, the granddaughter of a slave. Her mother, Caroline Frances Hawkins, moved to Cambridge, Mass., when Charlotte was a small child; there she married Edmund Hawkins, a brick mason.

A precocious child, Charlotte Hawkins distinguished herself as a superior student and a gifted musician in the Cambridge public schools. She attended Allston Grammar School and the Cambridge English High School. As a high school senior she met a woman who was to have a profound influence on her life, and the chance meeting was a story she never tired of telling. Employed as a babysitter for a Cambridge family, she was one day rolling a baby carriage down the street with one hand while carrying a copy of Virgil in the other. The juxtaposition attracted the attention of a passerby—Alice Freeman Palmer, second president of Wellesley College—who took an immediate interest in young Charlotte Hawkins. On learning that the girl planned to enter the State Normal School at Salem, Mass., following high school graduation, Mrs. Palmer insisted on assuming responsibility for her expenses.

A second chance meeting, in 1901, with the field secretary of the Women's Division of the American Missionary Association, led Miss Hawkins to her life's work. She was persuaded by the field secretary to return to her native North Carolina to serve the American Missionary Association in its effort to bring education to southern Negroes. After receiving permission to leave Salem Normal School prior to the graduation of her class, she returned south on 10 Oct. 1901, bound for what she thought was a well-established mission school at McLeansville, a whistle-stop eight miles east of Greensboro. Four and a half miles from McLeansville, at what would later be called Sedalia, Miss Hawkins found the school, a crude building that served as a combination church and school, peopled with fifty barefoot children. 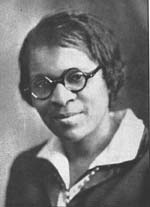 From these meager beginnings made even more desperate by the American Missionary Association's decision to close the school in 1902, Charlotte Hawkins worked to establish a new kind of school in rural North Carolina. Remembering her own experiences in the Cambridge public schools, she endeavored to create at Sedalia a school that would emulate the New England ideal in combination with the best of industrial education. Drawing on her friendship with Alice Freeman Palmer, Harvard's Charles W. Eliot, and Charles D. McIver, she returned to Massachusetts to solicit funds for her school, raising just enough to give the school life for one more year. She then reorganized the school and named it Palmer Memorial Institute, in honor of Alice Freeman Palmer, who had died in 1902. The first class met in a remodeled blacksmith's shed, and with the strong support of the people in the community the school survived. Her persistence on the school's behalf gradually found for her the support of Boston philanthropists, and she was also successful in enlisting the assistance of influential southern whites in nearby Greensboro. By 1910 property valuation amounted to $10,000, and the school's growth was just beginning. Support continued to develop, both in Greensboro and in Boston, highlighted by the interest of Mr. and Mrs. Galen Stone of Boston, who gave the school funds well in excess of $100,000 during the 1920s. Such generosity, coupled with the founder's skill and perseverance in procuring funds—she raised $350,000 in 1925 alone— made possible an impressive expansion and modernization of the school's facilities, despite disastrous fires in 1917 and 1922. The period of the depression, however, was a trying time for the school, although by 1946 the school's physical plant was valued at more than $500,000.

As her school grew in size and reputation, Charlotte Hawkins achieved state and national recognition. She spent the academic year 1927–28 studying at Wellesley, and she lectured frequently at Smith, Wellesley, Mt. Holyoke, and Radcliffe colleges, and at Howard University, Hampton Institute, and Tuskegee Institute. She received six honorary degrees, among them honorary doctorates from Lincoln University, Pa., in 1937, Wilberforce University in 1939, and Howard University in 1944.

She was also actively involved in efforts to improve race relations in the South. She was a charter member of the Southern Commission for Interracial Cooperation, a charter member of the Southern Regional Council, a member of the executive board of the Southern Region of the Urban League, a member of the Negro Business League, and a member of the home nursing council of the American Red Cross. In 1940, Governor Clyde R. Hoey of North Carolina appointed her to the state Council of Defense, thereby breaking a southern precedent by naming a black to that prestigious committee. In 1945 she received the second annual Racial Understanding Award of the Council for Fair Play, a group of northern and southern people interested in promoting racial harmony. She was also the first black woman to be elected to the National Board of the YWCA and was elected to that post by white women in the South through membership in the South Atlantic Field Committee. As president of the Federation of Colored Women's Clubs in North Carolina, she led a successful drive for the establishment of a state-funded home for delinquent black girls.

Charlotte Hawkins married Edward S. Brown on 12 June 1911. She was a Congregationalist and, although a lifelong Republican, a strong supporter of the New Deal, largely through her association with Eleanor Roosevelt.

She resigned the presidency of Palmer Memorial Institute in 1952, to be succeeded by her associate and former student Wilhelmina M. Crosson; she continued to serve as director of finance until 1955. Poor health sharply curtailed her activities in her later years, although she retained her strong interest in the school she had founded until her death at L. Richardson Memorial Hospital in Greensboro.

The Rise and Fall of Jim Crow, PBS: http://www.pbs.org/wnet/jimcrow/stories_people_brown.html