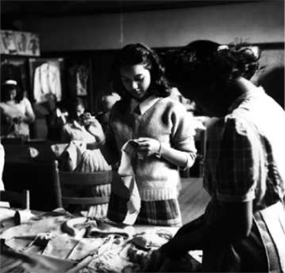 The Palmer Memorial Institute, located between Greensboro and Burlington, was founded in 1902 by educator Charlotte Hawkins Brown as the Alice Freeman Palmer Memorial Institute. Brown served as the school's president for 50 years. The school for African American youth was named in honor of educator Alice Freeman Palmer, Brown's friend and benefactor. It originally began operating in an old, run-down blacksmith shed, providing education for local rural black youth. From the beginning, Palmer emphasized both an academic and an industrial education. The school also ran a farm that provided agricultural training. The farm made it possible for students unable to pay tuition to work their way through school.

Palmer Memorial Institute was fully accredited by the Southern Association of Colleges and Secondary Schools (1922) at a time when few African American high schools were. By that time Brown had built Palmer into the only finishing school of its kind in America. It had evolved into an institution with a national reputation. At its height, the campus consisted of more than 300 acres of land and 14 buildings.

Starting in the late 1920s and early 1930s, the school abandoned an attempt to develop a junior college, changed from its original emphasis on industrial education, discontinued its elementary department, and limited its focus to college preparatory work. The changes proved successful, and by the end of the 1950s Palmer had an enrollment of more than 200.

For decades, over 90 percent of Palmer's graduating students attended college, and 64 percent pursued postgraduate degrees. Several years after Brown's death in 1961, the school began to decline. This was partly a result of integration, which made it possible for African Americans to be admitted to white public schools, and partly because of increasing costs associated with private education. Because of this and other factors, Palmer Institute experienced tremendous financial difficulties and was finally forced to close after a disastrous fire destroyed the school's administration and classroom building in 1971. The former campus is part of the Charlotte Hawkins Brown Museum, a State Historic Site.

Lucinda Saunders, "An Idea That Grew into a Million," Abbott's Monthly (November 1930).

Hi I’m curious Palmer is noted as being the first AA boarding school in the nation but Mather is older? What factors contribute to this discrepancy? Accreditation’s, pupil make up (co-Ed vs all women), ect. I just want to get the facts straight. Also do you have a list of North Carolina AA boarding schools that were in existence in 1930’s. Thank you for your help.

That is a really great

That is a really great question! From what I understand, Mather was for African American females while Palmer was co-ed. What that may mean is Palmer was the first open to both males and females.