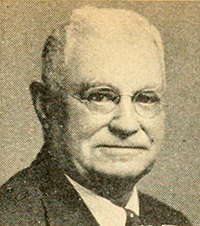 George W. Brown, physician, was born at Brower's Mill, Randolph County, the son of W. Duncan and Mary Elizabeth Guthrie Brown. He attended local public schools and was graduated from Shiloh Academy in 1892. For the following several years he worked on a Texas ranch owned by a physician. He spent his evenings reading medical books and was encouraged to attend medical school; he studied at the Kentucky School of Medicine, where he was graduated in 1898. He remained in Kentucky for six years, practicing in Covington, where he fought a typhoid epidemic.

Moving back to North Carolina in 1904, he settled in Raeford and was a leader there for almost half a century. He was instrumental in lobbying the legislature for the creation of Hoke County in 1911. He was a member of the Hoke County Board of Education for the period 1915–24 and was its chairman for the last four of these years, a time during which a number of new county schools were erected. He was mayor of Raeford from 1939 to 1942 and county coroner for many years. In 1943 and 1945 he represented Hoke County in the General Assembly as a Democrat.

Brown's interests also extended to business and farming. He opened a drug store out of necessity: he had to roll his own pills for his patients. He and two other men opened the Bank of Hoke, which was later sold to the Page Trust Company. The bank closed during the depression, and Brown lost a considerable sum of money. He also owned several farms and was particularly interested in growing cotton and tobacco. Although his political and business interests were wide, he devoted most of his time to medicine. He made house calls until he was seventy-seven and continued to see patients until his death.

Brown married Lola Kendall Crump on 5 June 1905, and they were the parents of George Clarence, Walter Duncan, Eleanor Guthrie, and Rosa Adrienne. He was buried in Raeford.

Minutes of Raeford Board of Commissioners, 1937–43 (Raeford).