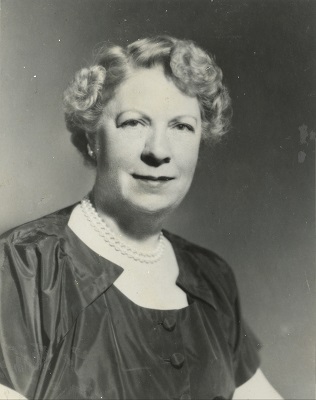 Gertrude Sprague Carraway defined her personal philosophy in three words: “history, education, and patriotism.” She said she “never had any specific goals,” yet her list of accomplishments was long. She was a prolific journalist and writer. She was a driving force behind the reconstruction of Tryon Palace. She was the site's first executive director. And she laid the foundation for the Palace’s educational mission. She served at the state and national level with the Daughters of the American Revolution National Society (DAR). She helped found the Historic Preservation Society of North Carolina and the NC Highway Historical Marker Program. She served on the Executive Board of the North Carolina Division of Archives and History. And she served as a Trustee of University of North Carolina. When she died in 1993 at age 96, the New Bern Sun-Journal declared her “New Bern’s historian.”

Carraway was born August 6, 1896 to John Robert Bennett Carraway and his second wife, Louise Elgie, in New Bern, North Carolina. She had two older half-siblings, Mary Louise Carraway and Robert Shields Carraway. A younger sister, Rose Brooke Carraway, was born in 1899, and a brother, William Elgie Carraway, in 1902. Carraway’s mother, Louise, emigrated from England in the 1870s with her widowed mother, Julia Brooke Elgie, and siblings. Julia Brooke Elgie lived with Carraway and her family at 207 Broad Street.

Carraway was an excellent student. The local paper regularly noted her high grades. She graduated high school at age 15. And then she attended State Normal and Industrial College (now UNCG). Carraway tested out of most freshman coursework. She finished a four-year program in three years. After graduating, Carraway taught English, French, and History in Jacksonville, Reidsville, and Smithville. In Smithville, she took up a new career path: journalism. She co-founded and edited the Smithfield Observer. In 1924, she attended a summer term at Columbia University in New York City. And there she served on the news board of the university’s student paper, Daily Spectator.  By 1926, Carraway was back in New Bern as the society editor for The New Bernian. When The New Bernian folded during the Great Depression, Carraway worked for the Sun-Journal. She was also a reporter reporter correspondent for the Raleigh Times and The New York Times. During World War II she was a correspondent on coastal issues for The Associated Press.

In the 1930s, Carraway began working with the New Bern Chamber of Commerce. There she published Historic New Bern: Guide Book. And instead of journalism, she began to focus on writing and publishing feature articles and local history. She wrote histories of New Bern Public Library, St. John’s Masonic Lodge, her home church, Christ Episcopal, women’s clubs in North Carolina and the Marine Corps bases at Lejeune and Cherry Point. A friend recalled, “She kept her typewriter humming.” During World War II she served as state vice-chairman for the women’s section of the War Bonds program. She received awards for meritorious service from the Elks, DAR. and the American Red Cross.

Carraway joined the Daughters of the American Revolution in the 1920s when the state regent recruited her. In 1946, she served as state regent. From 1950 to 1953, she edited the DAR Magazine and served as national vice regent. At her suggestion, the magazine began to sell advertisements, generating new revenue. In 1952, Carraway ran unopposed for the position of president-general of the DAR. Her platform was “economy, efficiency and expansion.” She enjoyed significant achievements during her term. She oversaw renovations of Philadelphia's Constitution Hall out of magazine advertisement revenues. She created new recruitment strategies to appeal to younger members. Under her leadership, membership numbers increased by thousands. In 1955, she persuaded California Senator William F. Knowland to sponsor a joint resolution on Constitution Week. In 1956, President Dwight D. Eisenhower designated September 17 to 23 "Constitution Week."

There were challenges and controversies, too. During her first year in office, conflict resurfaced over the DAR's refusal in 1939 to allow African American contralto singer Marian Anderson to perform at Constitution Hall. At the time, First Lady Eleanor Roosevelt had resigned her DAR membership in protest. Carraway pointed out that they had since allowed Anderson to perform. The organization also faced criticism for conservative political positions. Carraway supported anti-Communist activism. In her 1954 Continental Congress keynote address, she emphasized: “Treason should be condemned, not [the] exposure of treason.” Carraway often published pointed rebuttals to DAR critics. In 1956 she wrote the editor of The Washington Post and Times Herald, “I think you should break your precedent and habit, and, instead of being so prone to look for something to criticize about the DAR, publish an editorial favorable to our fine Society, praising at least some of our manifold outstanding accomplishments.”

After her term as DAR president-general, Carraway became the first director of Tryon Palace Restoration in New Bern. For two decades she had been an advocate of reconstructing the building, which had burned in 1798. In 1939 she discovered two sets of plans for the Palace drawn by English architect John Hawks. In 1945, Governor R. Gregg Cherry appointed her to the Tryon Palace Commission, along with the restoration’s major donor Maude Moore Latham. Carraway served as Commission secretary from 1945 until 1957.  And then she became director.

From 1957 to 1971, Carraway presided over the development of the Palace site and programs. She wrote and taught the curriculum for staff training. In the 1960s, she oversaw the relocation and preservation of the John Wright Stanly House. She published several short books: Historic Tryon Palace (1963), The Stanly (Stanley) Family and the Historic John Wright Stanly House (1969), and Old World Gardens in the New World (1969). Carraway built the Palace into an important tourist site that encouraged local and state economic development.

In 1968, Carraway announced her retirement from the directorship of Tryon Palace. She remained on the Tryon Palace Commission. After retirement, she continued to research, write, and publish. She authored or co-authored 36 entries for the Dictionary of North Carolina Biography, edited by William S. Powell. She published histories of St. John’s Masonic Lodge in New Bern. And she co-authored a booklet on Richard Dobbs Spaight.

Carraway died Friday, May 7, 1993, in her family home at 207 Broad Street. She is buried in Cedar Grove Cemetery, New Bern, North Carolina.

Articles by Gertrude Carraway, published in the Dictionary of North Carolina Biography and appearing in NCpedia:

Perry, Sarah. “The Power of Gertrude.” Our State (September 12, 2012), https://www.ourstate.com/gertrude-carraway/

The Order of the Long Leaf Pine Roster, http://longleafpinesociety.org/new/roster/index.php/roster/view

Ragan, Sam. Gertrude Sprague Carraway: together with the proceedings of a banquet on the occasion of the presentation of the North Caroliniana

NCpedia is the best ever!

From your loyal follower