William Claudius Chance, Sr., educator and humanitarian, was born in Parmele. His parents were W. V. and Alice Chance; his grandparents, who reared him, were Bryant and Penethia Chance; all were formerly enslaved people. Brought up on a small farm in poverty-stricken Martin County, Chance set out at an early age to improve his living conditions. After struggling through high school, while working on the farm, he entered North Carolina Agricultural and Technical College in Greensboro. Four years later he was graduated with honors with an A. B. degree in agriculture. He received additional education from Howard University in Washington, D.C., spending four years there, of which the last year was devoted to the study of law. He earned other credits, intermittently, from Hampton Institute in Hampton, Va., North Carolina College at Durham, and La Salle University in Chicago, Ill. 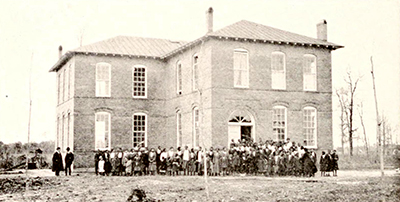 It was after attending Howard's law school that Chance became impressed with the idea of building a school to improve the plight of blacks in Martin County. Upon returning to Parmele in 1909 he witnessed, among other deficiencies, the dreadful condition of the only local school for blacks. This school had one room, sixty pupils, one teacher, and a $160 annual appropriation from the state for its operation. To help remedy this situation, he founded a private school, using his home and a community church as the facilities. Serving as principal and one of the three teachers, he initially attracted about thirty students. For two years the teachers, mostly without salaries, provided a practical education, emphasizing agriculture, industrial and mechanical arts, and domestic science.

Chance's school was the first in Martin County to initiate a longer school term, eight months yearly. Later, in 1911, the black public school and his private school merged to become Parmele Industrial Institute, a public school, of which Chance was chosen principal. With the aid of such distinguished people as U.S. Representative John H. Small and Dr. Anson Phelps Stokes, secretary of Yale University, he was able to attract enough funds to erect the first brick school building in Martin County in 1914. Expanding from year to year, Parmele Industrial Institute had by 1948 experienced substantial growth. In that year the school had 460 students, 12 teachers, 78 veterans enrolled in the veteran trade school, and 4 buildings. Five years later the enrollment had increased to 600 students, 200 veterans, 15 regular teachers, and 5 additional teachers for the veterans. Because of Chance's devotion to his school throughout the years, the community changed the name of the school to W. C. Chance High School. Under his leadership, the school in 1948 had the highest percentage of graduating seniors entering college (70 percent) of any school in Martin County (the average was 50 percent). Many of his former students rose to become attorneys, doctors, college presidents, college deans, businessmen, ministers, school principals, and teachers.

Having achieved many of his goals, Chance retired in 1951. Four years later a fire destroyed most of the school complex, although classes continued to be held in the elementary school building until 1969.

Although he was going into retirement, Chance by no means was destined for inactivity. Realizing the inequities in the white and black schools in Martin County, he was instrumental in organizing black parents behind Attorney Herman L. Taylor of Raleigh, who filed a petition with the board of education in 1951. This petition demanded either equality in the distribution of appropriations to the school system or integration. It was alleged in the petition that more money, teachers, and buses were given to the white than the black schools, although 53 percent of the students in the county were black. Although no immediate remedies for the problems resulted, the petition did serve notice that Chance and other blacks were ready for some drastic social changes.

Chance became perhaps more widely known for his successful challenge of the Jim Crow policy on the Atlantic Coast Line Railroad. He filed suit to recover damages from the railroad on the grounds that because of his race, he was wrongfully ejected from a railroad car on 25 June 1948 in Emporia, Va., and subsequently subjected to unlawful arrest and imprisonment in connection with this ejection. At the time of the incident he was returning from a business trip in Philadelphia, Pa. Between July 1948 and November 1952, four court actions were heard in the U.S. Court of Appeals for the Fourth Circuit, which ruled in favor of Chance and outlawed the Jim Crow policy in interstate travel.

Having won such a significant victory at the age of seventy-two, Chance still remained active in community affairs. He was a Presbyterian and a member of the NAACP and the Republican party.

Chance died in Lynchburg, Va., while visiting his daughter and ailing wife, a patient in Guggenheimer Hospital. His body was returned to Bethel for burial about four miles from his birthplace in Parmele.