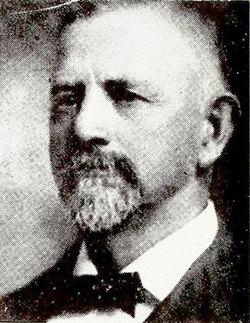 Alexander Chatham, merchant, farmer, and industrialist, was born near Wilkesboro of English ancestry. His father, Martin Chatham, had come from Augusta County, Va., and located in Wilkes County in 1828. A machinist and farmer, Martin Chatham operated a foundry and a repair shop in Wilkesboro. Alexander's mother was Mary Elizabeth Cass Chatham.

Chatham served an apprenticeship in his father's shop where, in line with natural interest and proficiency, he developed a high degree of skill in mechanics. At the age of twenty-five he moved to Elkin and secured a position with Richard Gwyn, who operated a mercantile business, a large farm, and a cotton mill known as the Elkin Manufacturing Company. Chatham had been there about three years when he married his employer's daughter, Mary Elizabeth Gwyn, on 28 Sept. 1862. He served as a lieutenant in the Confederate Army during the Civil War and after the war became a merchant and a farmer.

In 1878, Chatham and his brother-in-law, Thomas L. Gwyn, formed a partnership and built a small woolen mill, first known as Gwyn and Chatham, on Big Elkin Creek. This was the beginning of the Chatham Manufacturing Company, maker of world-famous Chatham blankets. In 1890, Gwyn sold his interest in the mill to Chatham's sons, and the name of the business was changed to Chatham Manufacturing Company.

Chatham operated a farm on the Yadkin River and organized and was first president of Elkin's first bank, the Elkin National Bank. His most vigorous years fell in the period of Reconstruction, and he became one of the founders of the New South. His enterprise gave the farmers of southwestern Virginia and northwestern North Carolina a market for their wool, as well as providing labor for the local people.

Chatham was a Methodist. His death occurred in Elkin, and he was buried there.