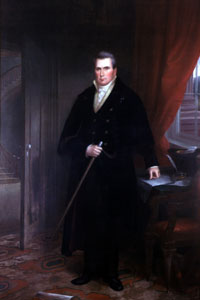 John Clark, governor of Georgia, was born in Edgecombe County. His father, General Elijah Clark, moved with his family from North Carolina to Wilkes, Ga., in 1773, but because there were no schools in Wilkes County, Clark was sent back to North Carolina for schooling in Wake County. He attended school until age fourteen, when he joined the army.

Clark served under his father in the Revolutionary War. He was made lieutenant at age fifteen and was a captain at age sixteen. Although just a boy, he did the service of the best soldier in the company's campaigns; after the Revolution he received eight hundred acres of land as his reward for "devotion to the cause of liberty." His military career did not end with the Revolutionary War. He was eager for military preferment. At age twenty-one he was a major in the state militia and fought in the Battle of Jack's Creek, named in his honor, against the Creek Indians. Years later, in the War of 1812, he was given command of the forces assigned to protect the seacoast and the southern boundary of Georgia.

For many years, Georgia politics revolved around the names of John Clark and George M. Troup. Between the two and their parties there was long and bitter strife. Partisan politics ran very high in Georgia, and political parties divided mainly on social lines. The Troup party was made up of slave owners and such well-to-do men as William H. Crawford, James Jackson, and Judge Charles Tait, and the democratic, small farmer, frontier element of the population constituted Clark's party. The Clark family had been prominent from the first in the North Carolina settlement in Georgia. General Elijah Clarke—the son dropped the final "e"—was more or less implicated in the Yazoo frauds, and James Jackson's arraignment of all Yazooites drove them into a defensive organization under John Clark. As leader of the faction, it was his agreeable duty to oppose the Virginians to the full extent of his power.

Clark had the art of surrounding himself with friends who supplied in culture what he lacked and whose devotion to him was beyond question. In 1787, when he married Nancy Williamson, the daughter of Micajah Williamson, he became allied with some of the leading families of the state. As a result, important civil offices became available to him. He ran for Congress in 1810 but lost the election to William Wyatt Bibb. In 1816 he was chosen as elector of president and vice-president.

There is no question that Clark had very bitter enemies, who were determined to prevent his ambitions from being realized and willing to use very questionable means to overthrow him as leader of the party. He was therefore very suspicious of those he considered his enemies and unrelenting in his hatred for them. A man from North Carolina, who knew of the hostility between the Georgia political parties, concocted a scandalous fraud to ruin Clark. Judge Charles Tait innocently fell into a trap set by this schemer, and Clark, putting together the circumstances, decided that Tait and William Crawford had entered into a conspiracy to defame him. To get revenge, Clark took a horsewhip and attacked Tait, who was lame, while the judge was quietly riding down a street in Milledgeville, Ga. Clark was prosecuted and fined two thousand dollars for the assault, but the fine was remitted.

Duels were a convenient way to get rid of political opponents and party leaders. Crawford challenged Clark to a duel on 6 Dec. 1804, but it was called off after the governor intervened. Bitterness between the two again reached a breaking point in 1806, and Clark challenged Crawford. They met on 16 Dec. at High Shoals, in Indian Territory. Clark harassed Crawford until he was angry and off his guard, and his disengaged wrist (which should have been behind him) was struck by Clark's shot. Instead of being appeased by his accidental success, Clark was furious that he had not killed Crawford. He renewed his challenge for a duel but, since they had no new quarrel, Crawford could decline without loss of honor. Therefore, Clark tried to obstruct Crawford's political advancement in any way possible. The more brilliant the achievements of Crawford, the more unrelenting was the hostility of Clark.

While Clark was becoming popular in state circles, Crawford was becoming prominent in national politics. The place Crawford left vacant in Georgia was filled by George M. Troup. The Clark and Troup parties contested in every election after 1807 with varying success. Their political battle did not become violent until after 1818, when the declining price of cotton sharply divided the prosperous from the less prosperous class.

Clark, a politician of the extreme Andrew Jackson type, won the governor's seat in 1819 by a majority of thirteen votes in the legislature; two years later he was reelected by a majority of only two votes. He was not a very able governor: Wilson Lumpkin, his strongest political colleague, has written that he supported Clark more from sympathy than from any appreciation of his ability. Clark did not accept partial support, however, and most of his associates yielded without question to his demands. Matthew Talbot, a Clark man, lost the 1823 election for governor to Troup by four votes. In 1825, Clark ran against Troup for the governorship. In the meantime, a constitutional amendment had transferred the election from the legislature to the people, with the Clark faction claiming credit for this democratic change. Troup won the election by a majority of 683 votes. Oddly enough, the newly elected legislature contained a majority of Clark men, indicating that Clark would have triumphed if the system had not been changed. At this point, Clark retired from politics. After his retirement, his party merged with the Democratic party under Jackson. The Troup faction became allied with the Whig party.

After accepting an appointment by President Jackson as Indian agent in 1827, Clark and his wife moved to Florida. They both died of yellow fever there and were buried in St. Andrews, Fla.

George R. Gilmer, Sketches of Some of the First Settlers of Upper Georgia (1926).

George Gilman Smith, The Story of Georgia and the Georgia People (1900).